Railway exhibition gets off to steaming good start 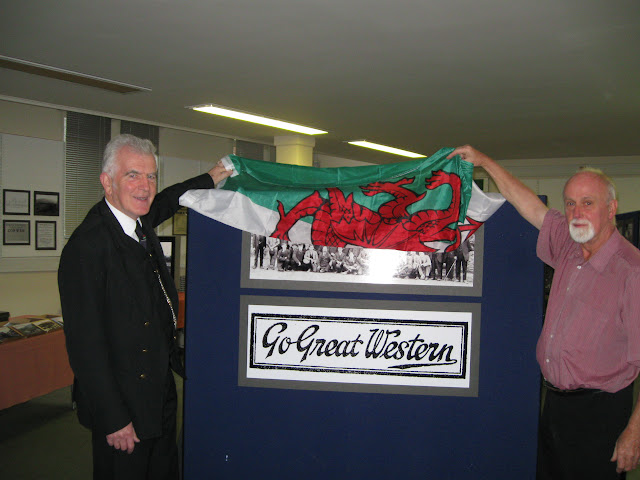 An exhibition promoting interest in the Corwen’s railway past and Llangollen Railway’s plans for the railway extension project opened at the Oriel Gallery, London Road, Corwen last Friday.

Entitled “Corwen – a Railway Town”, the exhibition features railway photographs and documents, together with items of former railway artefacts from the local lines around Corwen.

Another feature is a display about the new build Patriot class locomotive “The Unknown Warrior”, as currently being erected at the Llangollen Railway’s engineering base.

The exhibition is organised by local author Paul Lawton and Martin Christie from Carrog station.


At the opening ceremony, Llangollen Railway Trust chairman Jim Ritchie was joined by Martin Christie from Carrog station in lifting the Welsh flag from the entrance photographic display.


Initial attendance was mainly by those who had played a role in setting up the displays, but by lunchtime other visitors began arriving to take in the exhibits and favourable comments were left by all of them about the quality and content of the exhibition.


Of particular appeal is the digital slide show comprising some 200 assorted views of Corwen and its railway over the past many decades which comes with steam age sound track accompaniment.


It is a notable collection of images shown to advantage through the modern medium of a large screen.


The display containing details of the Llangollen Railway's track extension project was well received and many questions were asked about progress and delivery of the trains back to the Corwen East station, pending provision of the ultimate terminal station.


Chris Magner, from Bridgnorth, Shropshire, also attended to launch his new book, “Ruabon to Barmouth - A Tribute to a Welsh West Highland Line".