I'm
* Scenes from La Traviata at the Stiwt. 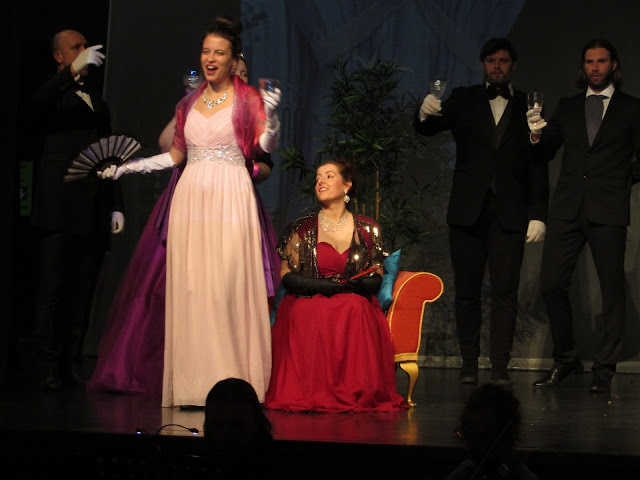 A group of talented people passionate about classical singing are set to bring one of the world’s greatest operas stunningly to life at the Stiwt in Wrexham later this week.

Under the expert direction of international opera professionals Anne Williams King and David Bartlett, the group from the acclaimed North Wales Opera Studio (NWOS) will present Verdi's tragic love story La Traviata in the fittingly ornate setting of the  Rhos theatre tomorrow (Thursday) and Friday evenings (April 28 and 29) then at St George’s Hall, Liverpool in the afternoon and evening of Saturday, April 30.

I was able to catch a preview performance at the Stiwt and was highly impressed with the sheer professionalism of the presentation, which enjoys the deft touch of Janet Haney as music director and accompanist, joined by a small instrumental ensemble. Choreography is in the experienced hands of Lyn Aston.

The unfunded NWOS is an educational group for young aspiring opera singers to train and get excellent performing experience. It also encourages local people to be involved who want to be part of a top-class venture.

The group returns to the Stiwt after its successful Night at the Opera concert there last month and la Boheme last September.

Anne Williams King said: “We are providing an opportunity for those who appreciate opera, to see impressive, traditional productions with young exciting singers, without having to travel miles and pay huge prices for tickets.

“I'm trying to build a following in the area and encourage people to come and support us and the Stiwt Theatre.”

Judging by the sheer power and majesty of their La Traviata, which is played out in its original language, the success story of NWOS looks set to continue.

Featuring one of the most iconic, romantic and tragic scores of all time, Verdi’s masterpiece contrasts spectacular party scenes with tender, intimate moments.

It tells the story of the tragic love between the courtesan Violetta and the romantic Alfredo Germont.

Played out against the hypocrisy of upper-class fashionable, Alfredo and Violetta’s love threatens to shame his family.

When his father directly appeals to Violetta to give up her one chance of happiness Violetta submits but her act of self-sacrifice leads to her paying the ultimate price.

NWOS has two alternating casts for the lavish production.

In the version I saw Violetta was played with power yet tenderness by Australian soprano Joelene Griffiths who stepped into the challenging role at virtually the last minute after the person originally due to appear in it was forced to withdraw due to an injury.

Luckily, Joelene had become familiar with the part while studying at the Welsh Academy of the Voice in Cardiff and was able to seamlessly take it on.

Playing opposite her as Alfredo, with great aplomb, was tenor Lewis Quinn. He presented a marvellous portrayal, his strong, clear voice dominating the auditorium.

Appearing as Giorgio Germont, Alfredo's father, was Ambrose Connelly. He brought true gravitas and authority to the demanding role.

The chorus was simply superb and memorable for its sheer supportive power.

Music accompaniment was more than capably provided, costumes were dazzling and settings arranged to perfection.

This not-to-be-missed production is a true extravaganza of musical exuberance and acting skill.

Posted by llanblogger at 7:08 AM