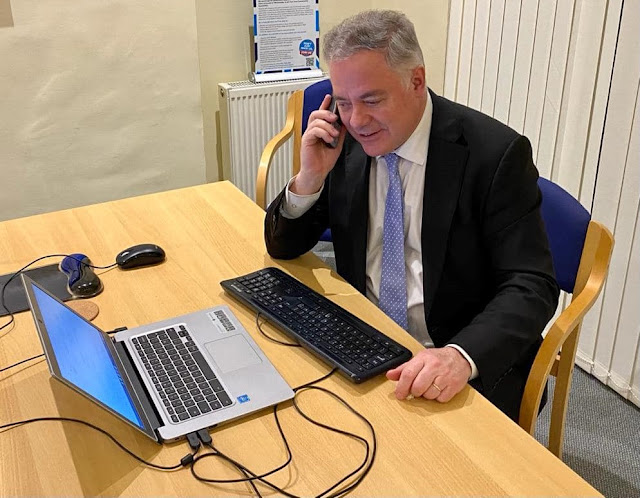 Clwyd South MP Simon Baynes (pictured) has welcomed the decision by communications providers to pause the Digital Voice switchover for customers who do not want to move to broadband landlines straight away.

Digital Voice is a nationwide programme which will see all landlines moved over from analogue Public Switched Telephone Network (PSTN) lines to broadband Voice over Internet Protocol (VoIP) lines.

The programme has been led by the telecoms industry to replace the antiquated and increasingly unreliable PSTN network.

However, constituents across Clwyd South have contacted Mr Baynes to raise several concerns about the switchover, which included:

Mr Baynes has been liaising with telecoms providers and the UK Government to report such concerns from constituents, and to seek assurances that their landline service would be protected against such factors.

Telecoms providers have now announced that in response to these concerns, all further Digital Voice switchovers are being paused for customers who do not want to move to the new technology straight away.

This is to allow the providers time to get key products in place to provide customers with more resilient connectivity, which will include;

Mr Baynes said: “I am very pleased that telecoms providers have reacted to the concerns raised by many of my constituents within Clwyd South, in pausing all further Digital Voice switchovers until the technology is sufficiently robust.

“Recent storms have highlighted the need to have resilient connectivity in the event of extreme weather, and rural localities such as Clwyd South are unfortunately much more exposed to challenges such as prolonged power cuts and unreliable broadband and mobile service than urban areas.

“Of course, the PSTN network is becoming increasingly antiquated and difficult to maintain, so the need to switch over to digital services is very real. I am therefore glad that the UK Government and the industry have enacted this pause, to enable improved technology to be available for those who require it when they do eventually make the switch to digital.”

* BT customers who are concerned about the decision to move to Digital Voice can contact the company on 0800 800 150.