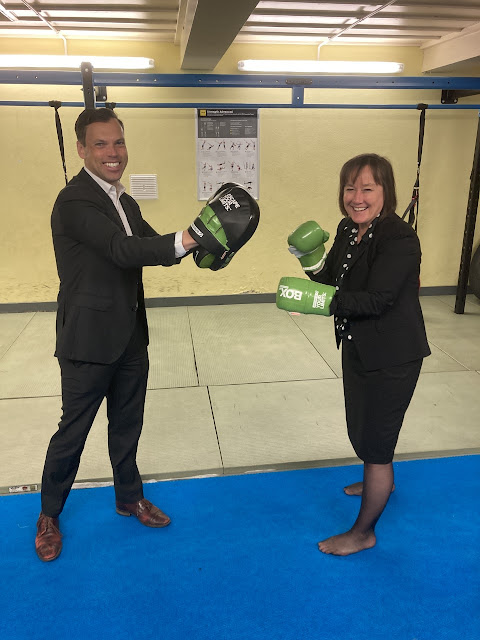 She was welcomed to the centre by Stella Matthews, chair of the volunteer-run Splash Community Trust which runs Plas Madoc.

The Shadow Welsh Secretary said: “Visiting Plas Madoc was a trip down memory lane for me. I first visited the centre back in the 1970s as a child.

“Ken told me about how the wonderful team at Plas Madoc took it from almost being demolished to being named the best social enterprise in Wales. They have done an amazing job, and it’s become a real community hub thanks to their hard work.

“The centre is a brilliant example of how the Welsh Labour Government has invested in local communities and worked alongside them. Stella told me that she didn’t think it would be going without the crucial support they’ve had.”

The Shadow Welsh Secretary later visited The Stiwt in Rhos, where she was given a tour and told about the board’s plans for the future.

She said: “I’ve never been to The Stiwt before, but I know how iconic it is not just locally but throughout Wales. Susan Elan Jones, the former MP for Clwyd South, told me many times about The Stiwt and her home village of Rhos, so it’s been lovely to visit and catch up with Susan, who remains a passionate member of the board.

“It’s a stunning building, and just like at Plas Madoc it was clear to see how dedicated the team is. It’s a real labour of love for the trustees.”

Mr Skates said: “It was brilliant to welcome Jo back to Clwyd South and show her some of our most valued and iconic community facilities. I was extremely proud to be able to highlight the fantastic work being done as both venues look to the future with confidence.”