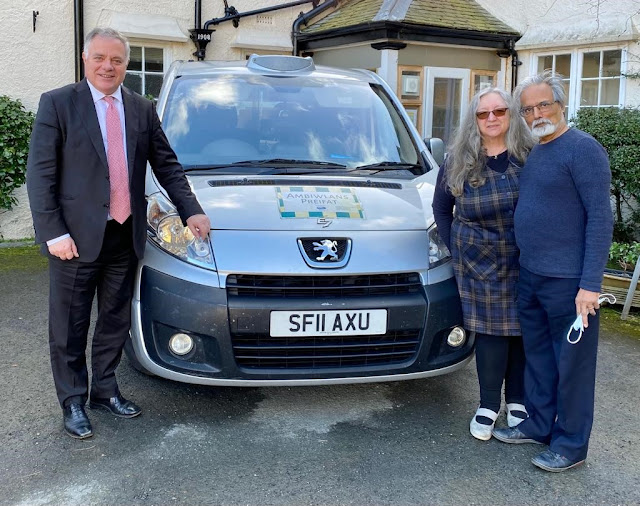 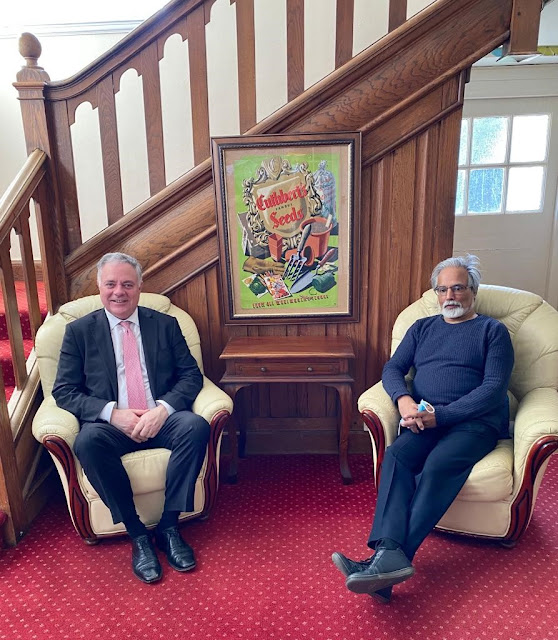 * Simon Baynes MP and Kenneth Mascarenhas next to the Cuthbert’s Seeds poster.

Clwyd South MP Simon Baynes recently visited the Abbey Dingle Care Home in Llangollen to gain an insight into its activities - both recently and earlier on during the Covid-19 pandemic – and to learn more about its history.

During the visit, Mr Baynes met with Kenneth and Carol Mascarenhas, the directors of Abbey Dingle, who have run the home since its creation 35 years ago.

Mr Baynes discussed with them the safety initiatives taken by staff at the home to keep residents well, both in body and mind.

Apart from the long experience of a loyal workforce, this included  the creation of a dedicated isolation wing, a Covid-proofed visitor/reception centre and a purpose-designed vehicle  for the protected transport of residents and staff outside the home, and openly sharing the ideas with the authorities and the community.

At the onset of the pandemic in February 2020 home-made PPE packs designed and made with the assistance of the residents, the local school and others in the community, were issued to all staﬀ and residents visiting relatives for their protection outside the home. Thanks to this the home has had no Covid casualties throughout the pandemic.

Mr Baynes heard about the extensive programme of activities that Abbey Dingle organised for its residents throughout the year during lockdown maintaining their holistic well-being.

Mr Baynes also learnt more about the history of the site – the former J&R Cuthberts (Horticultural Seeds) Administration Centre (secretly relocated from London to protect the valuable seed stocks from being destroyed) and how it played a major role in originating the famous Dig for Victory campaign during World War II.

The home currently has an original Cuthbert’s Seeds poster on display, which has kindly been loaned to the home by Robert (Bob) and Sandie Attenburrow (sadly recently deceased), formerly of Dobson & Crowther Printers in Llangollen.

Kenneth and Carol Mascarenhas also invited Mr Baynes to see Abbey Dingle’s own dedicated  ambulance/courtesy car, which is on standby and available, should it be needed, at all times.

Kenneth Mascarenhas said: “The arrival of Simon Baynes MP was a very welcome surprise to the home, in view of his present busy schedule in Westminster in these difficult and testing times.

"Whilst access to the home was restricted due to ongoing Covid counter-measures, the residents and staff were very appreciative of him making the time and effort in visiting them and noting his concern for their well-being during lockdown.

“He came across as a very approachable, level-headed and energetic individual, representing the people of Clwyd South and North Wales in Westminister; having had the experience of working at grass roots level in his family’s hospitality and tourism business at the local Lake Vyrnwy Hotel, and later in the international banking and finance industry in the City.

"He is noted for promoting Wales’ economic and national interests at every possible opportunity at central Government level, as clearly evidenced by his media appearances in Parliamentary debates etc.

“As a humanitarian, historian, and supporter of the arts, his recent appointment as a Parliamentary Private Secretary to the UK Ministerial team at the Department for Digital, Culture, Media and Sport is well earned and deserved.

"The work of the Department covers many areas of UK Government policy which are extremely important for the whole of Wales’s diverse historic, cultural and economic heritage and the need for good national transport links, internet access and online presence, and considered a prelude to a  ministerial appointment in the Government Cabinet.

“He was also very keen to encourage the promotion and documentation of the history of the town’s destination attractions of the Eisteddfod, Railway, Canal and Horticultural heritage and indeed, his next visit was scheduled to the town’s railway and Llangollen museums.

"As a memento and practical incentive to help promote  the town’s heritage, Simon arranged to have a dedicated copy of his book which he co-authored with his father documenting the history of his local family-run hotel at Lake Vyrnwy, for the home’s library, offering help and advice to anybody prepared to rise to the challenge, which can only benefit the economy and community in these uncertain economic times.”

Simon Baynes said: “I was greatly impressed to hear about the many sensible and safe precautions taken by Kenneth, Carol and the rest of the team at Abbey Dingle, which have had the effect of preventing any Covid casualties at the care home.

"I understand that most of them were based on the work of Florence Nightingale and Mary Jane Seacole from the Crimean War in 1853. I enjoyed my visit very much, and was most impressed by the regular activities organised for residents at the home.

“The building has a fascinating history and I was very interested to hear about its contribution to the British war effort and the ‘Dig for Victory’ campaign during World War II. The whole team of staff do an amazing job and I would like to praise them for the work they do under extreme duress from challenging external events impacting on the operation of the Home.

“It is also noted that as a continuing family commitment to the Llangollen community, Carol and Ken’s children, Richard and Bethan, have chosen to involve themselves, and presently manage another small local care home, The Old Vicarage in Llangollen, in family succession, previously established by Bronwen and David Morris 30 years ago.”