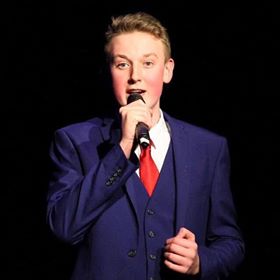 During lockdown 17-year-old Shea Ferron, well known for his acting and singing in a range of local amateur shows, has raised over £1,200 for charity through his outdoor performances. In an article written originally for the Eistedfodd volunteer newsletter, he describes how he did it.

"I was very saddened to hear that this year’s eisteddfod was cancelled due to the current circumstances.

Eisteddfod week for me is one of, if not, the best week of the year.

I love how people from all around the world are able to come together and unite in the language of music, and really I’ve been using this as an inspiration during lockdown.

Two weeks before we were in lockdown I was seeing videos of Italian people singing on their balconies to entertain one another and this gave me the idea for my street concerts and fundraising concerts.

Within the first few days of lockdown I was having neighbours passing my home telling me that I should hold some sort of concert for the neighbours and at first I wasn’t sure how everyone would react but I gave the idea a go.

I went live onto my Facebook page and performed live for my street. The neighbours loved it along with 12,000 people who were watching online.

This idea has continued and we are regularly holding them each week and look forward to carrying them on post lockdown!

I take requests for donations each concert to raise money for the NHS and we have raised just under £200.

As well as this, I have been posting online videos onto my singing page on Facebook.

Taking part in the Musical Theatre Self Isolation Challenge has been great fun and something that has kept me busy!

My video raised £300 for Cancer Research in memory of a teacher from my primary school who sadly passed away.

This has developed into holding charity concerts online in a concert series I’m calling “From Stage to Sofa”.

I was first approached by North Clwyd Animal Rescue Centre, near Holywell, wondering if I’d be interested in supporting.

I didn’t hesitate in responding with a yes as we have supported the centre for a number of years having adopted two dogs from there. The concert was a success having raised £500 for the charity.

I have since held another in aid of Nightingale House Hospice and raised £250 and am looking to hold more during the weeks to come.

One thing I’ve found in doing these is that people have united (at a distance) just like they would at the eisteddfod.

Neighbours who would usually be a hermit in their homes have come out and socialised with us and relationships have developed with people who were new to the neighbourhood and were a little shy to get to know others.

One thing to look forward to post lockdown is the community spirit that has been developed and the long-lasting friendships that have been gained.

We can all take lockdown and have our own little eisteddfod within our own communities using the important message to unite."
Posted by llanblogger at 6:32 AM