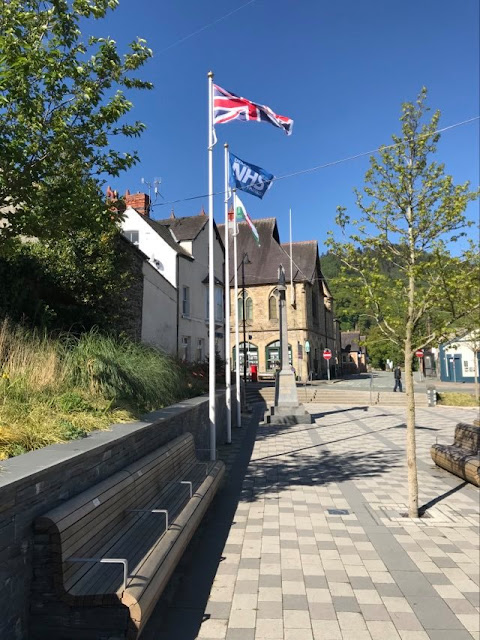 * Centenary Square, complete with its new NHS flag,
shots of which will feature in the VE Day Stay at
Home Party programme to be streamed live on Friday afternoon.

With Llangollen having its own virtual VE Day celebration on Friday a North Wales Member of the Senedd (MS) is urging people to take part in revised events to mark the 75th anniversary of the landmark occasion.

A number of local, regional and national events had originally been organised to mark the end of hostilities in Europe at the tail end of the Second World War, but as the country deals with the Covid-19 pandemic these have had to be cancelled and revised plans have now been put in place.

This includes the Llangollen Stay at Home VE Party programme arranged by the Town Council to be streamed live on Facebook at 3pm on Friday.

Mark Isherwood MS said: “The coronavirus outbreak means that there will be no street parties, parades or concerts this year, but nonetheless there is plenty going on to celebrate.

“This Friday at 11am a Two Minute Silence will be held to honour the service and sacrifice of the Second World War generation, and also take the opportunity to reflect on the devastating impact Covid-19 has had on so many lives across the world.

“There is no right or wrong way to take part in the Silence, some people may wish to stand at their windows or step outside their front door, but I urge individuals and families across Wales and the UK to embrace this opportunity to share in a national moment of reflection.

“At 3pm, Sir Winston Churchill’s 1945 speech to the nation will be broadcast on the BBC as part of special programmes planned for the day, and you can stand up and raise a glass of your choosing whilst saying the following toast: 'To those who gave so much, we thank you'.

“On the same day from 8pm on BBC One, I hope you will all watch the thanksgiving programme which will honour and celebrate the Second World War generation with an evening of memories and music, including Vera Lynn’s ‘We’ll Meet Again.

“At 9pm, HM The Queen will broadcast a message to the nation on the BBC – at the exact moment her father, King George VI, gave a radio address in 1945.

“We may not be able to have the big celebrations we originally had planned, but It is our collective responsibility to ensure that the sacrifice made in the Second World War is never forgotten and for that reason I urge you all to mark the 75th anniversary of VE Day.”

* For further information on the revised events, visit:  https://ve-vjday75.gov.uk/
Posted by llanblogger at 11:56 AM