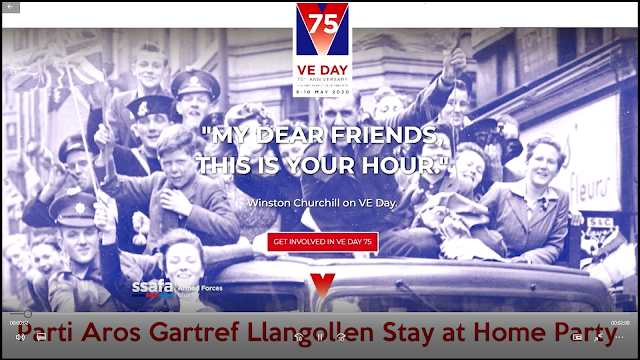 Later today Llangollen Town Council is to stage a virtual celebration of the day the Second World War ended in Europe 75 years ago.

Earlier this year, the council tasked a small group to begin planning for a party to celebrate the milestone anniversary of VE Day.

The aim was to put this on at the town hall and to include a tea dance, music of the era and to generally make merry.

The coronavirus lockdown appeared to put an end to the project - until the group came up with the idea of staging the celebration online instead.

So at 3pm today they will live streaming the big VE Day Stay at Home Party on Facebook for what they hope will be a large social media audience.

The professionally-shot programme, which runs for half an hour, will feature memories of the wartime era recorded via Skype with a group of residents at the local Old Vicarage Care Home, favourite songs from the period such at A Nightingale Sang in Berkeley Square and Goodnight Sweetheart sung by local performers and a poignant wreath-laying ceremony by the town’s branch of the Royal British Legion.

Eleri Jones, a local actor and director currently on the trainee directorship at Theatr Clwyd, will perform local poet I D Hooson's The Red Poppy against the backdrop of 75 ceramic poppies placed near the war memorial on Centenary Square.

Deputy town mayor Cllr Issy Richards, who heads the council’s Remembrance Day Working Group which organised the virtual party, said: “When the lockdown began we immediately cancelled our planned party at the town hall but then we decided that a version of the event could be streamed on social media.

“We have been extremely fortunate in having a Llangollen-based professional programme maker as director on the production and also being able to draw on the talents, in terms of organisation and performance, of quite a few people from this area.

“We were also very lucky to have a number of marvellous people still living in our community who remember the war very clearly and who allowed us to record their recollections of the time.”

It will also be streamed later on the Facebook page: https://www.facebook.com/Parti-Aros-Gartref-Dydd-B-E-Llangollen-V-E-Day-Stay-at-Home-Party-103158784706199/?epa=SEARCH_BOX
Posted by llanblogger at 6:56 AM