* Above, Mel's 75th donation badge and,
below, his letter from the Welsh Blood Service. 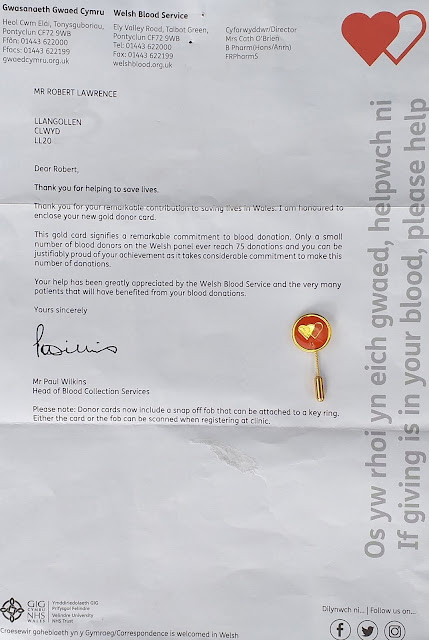 While the country is marking the 75th anniversary of VE Day, a Llangollen man has been honoured for passing another special 75th milestone.

Mel Lawrence, well-known in the town as chair of Llangollen Civic Society, has just received a certificate and badge to acknowledge his 75th blood donation session.

In a letter to Mel, who is also a regular volunteer at Chirk Castle gardens, Paul Wilkins, head of collection services for the Welsh Blood Service, says: “This is quite a remarkable commitment to blood donation.

“Only a small number of blood donors on the Welsh panel ever reach 75 donations and you can be justly proud of your achievement.”

Mel, who is 75, said: "I started donating blood in the early 1970s when I worked in Derby and donations could be made at a place very close to my office.

"Later when I moved to work in Swansea donations could be made in a church hall which was again near my office.

"Back then, people had to lie on a bed for about 20 minutes to recover from making a donation but nowadays you can get up and go straight away.

"I was doing three donations a year. I'm still donating and now do about four a year."

He added: "It's nice to be acknowledged with the letter and the badge and I was really chuffed to get the letter as it's recognition for my donations."
Posted by llanblogger at 7:07 AM