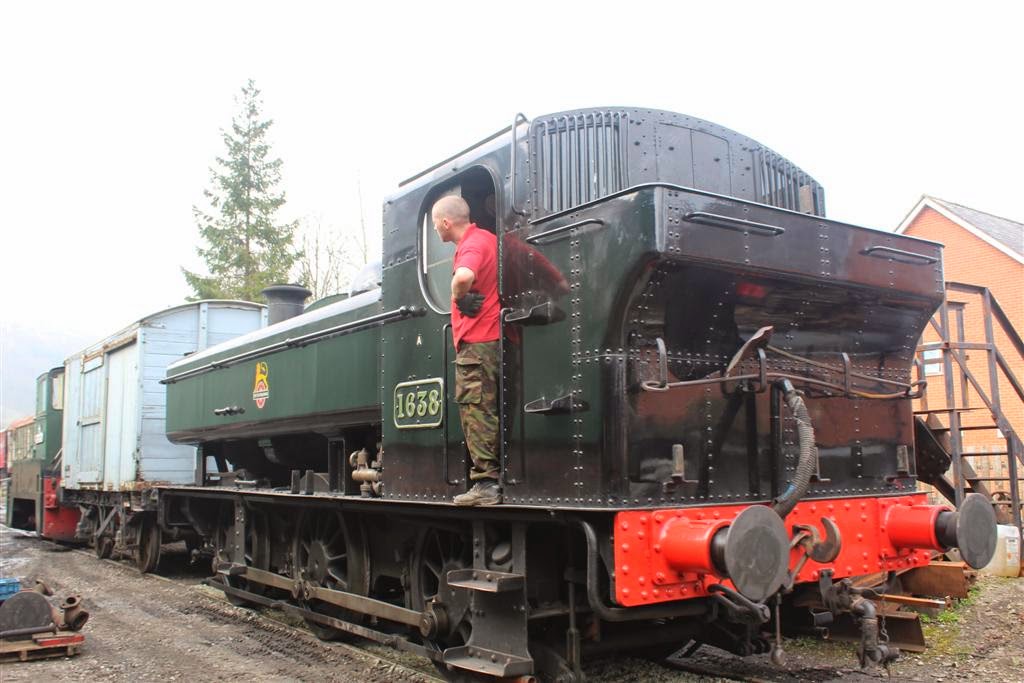 * Locomotive no.1638 being off-loaded from a lorry at Llangollen. 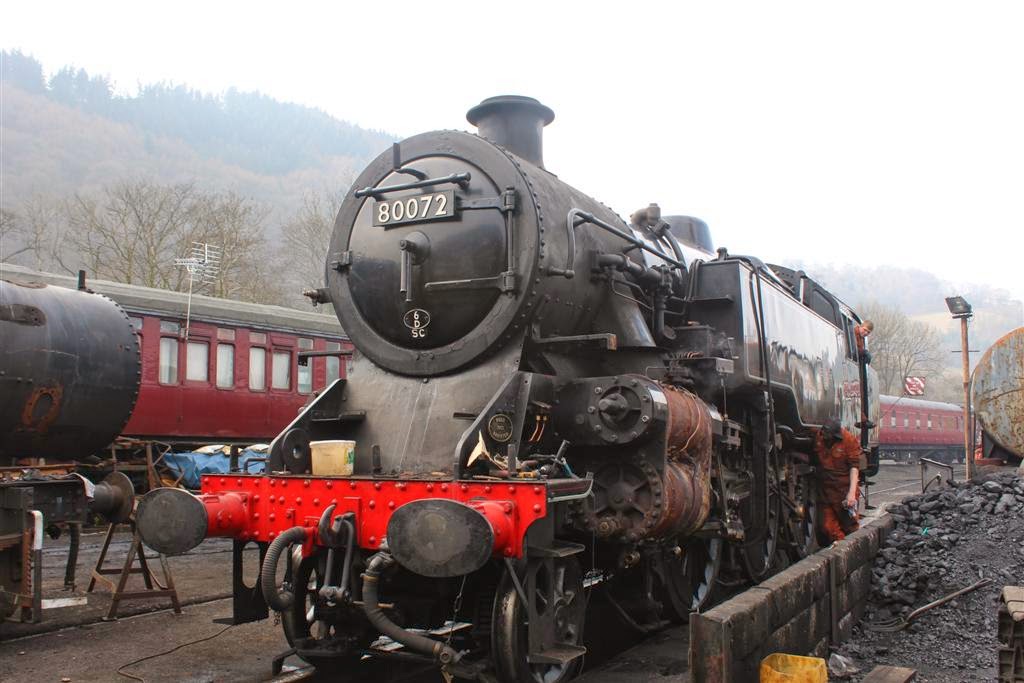 * Standard tank no. 80072 being readied for a steam after
a repair to the left hand cylinder which has kept the engine
out of action since Christmas.
The first of two visiting steam locomotives has arrived at Llangollen Railway in time for the spring steam gala at the weekend.

The British Railways Western Region pannier tank engine No.1638 was off-loaded from the lorry on Monday afternoon having been hired for a special appearance at Llangollen from its owners at the Ken & East Sussex railway.
No.1638 was built at Swindon in 1951 as a light weight version of the familiar Great Western Pannier Tank, able to access yards with tightly curved track of which there were several around Wrexham.
The engine was once a resident at Wrexham's Croes Newydd engine shed from which it was withdrawn in August 1966.
Dave Owen, Chief Engineer at Llangollen Railway, said: "This is a welcome return to the area for an engine which was once active hauling short freight workings on the Minera branch and the line from Trevor into the Monsanto works."

The second visitor is due later this week when Great Western No.5322, a Mogul type 2-6-0 engine, will arrive on hire from the Didcot Railway Centre in Oxfordshire.
It is one of only two survivors of a once extensive class of locomotives which provided much of the motive power for trains on the Ruabon to Barmouth line.
Although not based at Croes Newydd, No.5322 is known to have visited the line on occasions when working trains to and from the coast.
It is representative of many well remembered engines which worked trains around Wrexham in Great Western days and in the early years of British Railways.

These two visitors will join with the Llangollen-based Standard tank No.80072 and Great Western Heavy freight engine No.3802 to put on a three-day gala event which will recall the great days of steam at Croes Newydd shed.

The action starts on Friday at 9.30am for the first departure from Llangollen.
Details of the train departures are on the Llangollen Railway website at: www.llangollen-railway.co.uk
George Jones, for Llangollen Railway, said: "This gala is dedicated to the loco shed based in Wrexham, which used to supply the motive power for the Llangollen to Corwen line.
"An intensive frequency of trains will operate on all three days, including a demonstration pick-up freight to show how the railway used to operate when it provided an essential transport facility in the Dee Valley.
"Former railwaymen based at Croes Newydd shed will wish to attend the gala to recall their working careers and be reacquainted with the pannier tank 1638 on which they may have once worked."
Posted by llanblogger at 7:43 AM