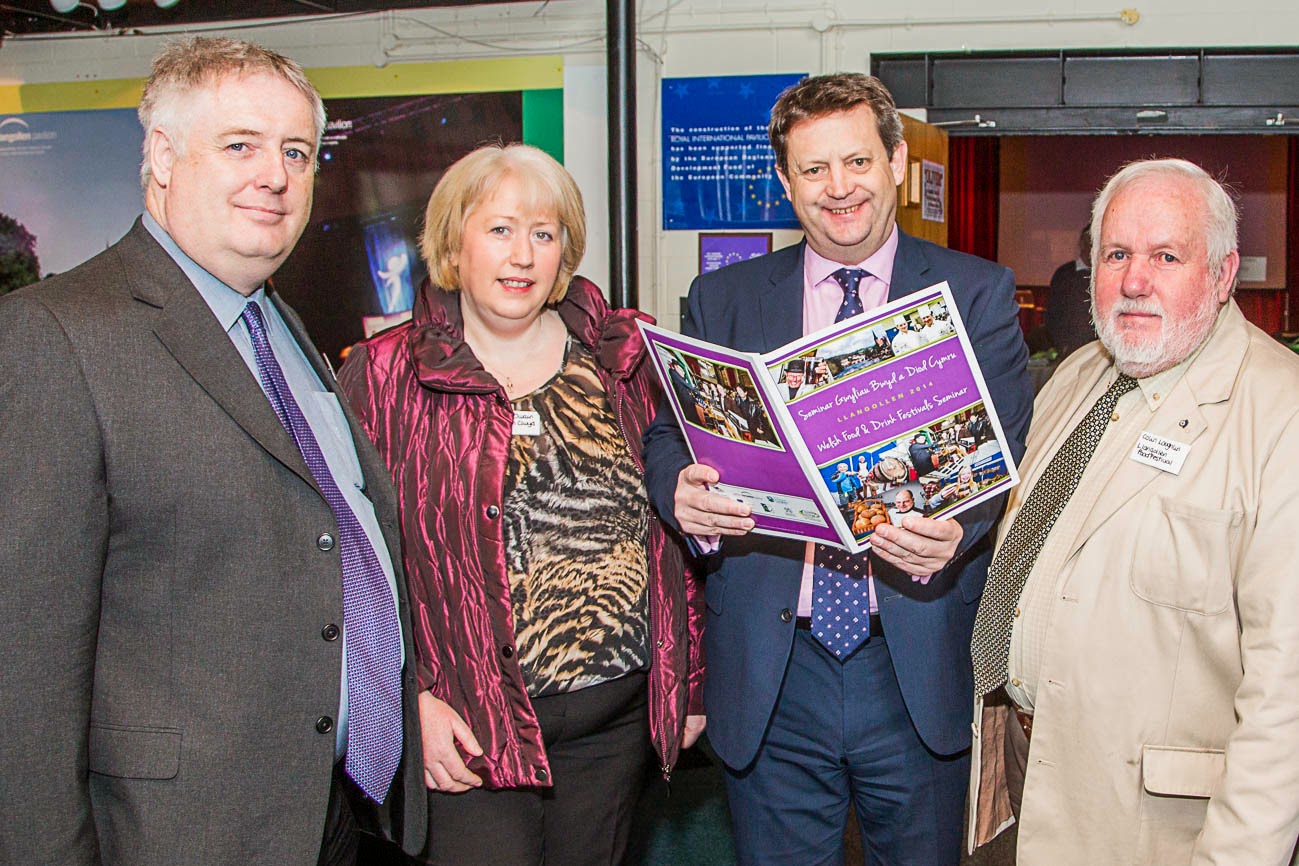 * Alun Davies, second right, Welsh Government Minister for Natural Resources and Food, at the Food Festivals Seminar held by Hamper Llangollen with, from left, Andrew Knight, Welsh Government; Lowri Owain, of Cadwyn Clwyd; and Colin Loughlin, Chairman of Hamper Llangollen.
A campaign has been launched to form a new association to promote the food and tourism sector in Wales.
The driving force behind the new grouping is the Hamper Llangollen.food festival that's been named as one of the top ten food festivals in the UK.
They hosted a well-attended seminar of food festival organisers from across Wales and the success of the event has prompted them to lead the drive to set up a new association.
The event, at the Royal International Pavilion and supported by rural regeneration agency Cadwyn Clwyd, brought together organisers of festivals from Narberth to Newtown and from Merthyr to Menai as well as Welsh Government representatives, tourism chiefs, food producers and retailers.
It saw Welsh Food Minister Alun Davies give the keynote address but it was the response from the delegates that encouraged the Llangollen festival to propose the creation of the new organisation.
Hamper Llangollen Chairman Colin Loughlin said: “This was the first time a seminar like this had actually been organised and hosted by one of the festivals rather than by the Welsh Government.
“It was so successful and well received and provided such a god forum for ideas and discussion that we thought why not form an organisation that could represent us all.
“Welsh food festivals are great drivers of tourism and also showcase the wonderful range of food and drink that is produced here so we are important for the visitor economy and for the agricultural and food sectors.
“An association of food festivals would give us greater influence but it would also lead to a better exchange of ideas as well as the opportunity to save money by sharing resources and central purchasing of services like insurance.”
The seminar at Llangollen was attended by food festivals from throughout Wales as well as by Welsh Government officers and experts on marketing and food production and a further meeting is planned for later this month in Aberystwyth.
The Llangollen event was praised by Heather Myers, Chief Executive of one of Wales’s largest food festival, at Abergavenny, who said: “I thought the seminar was brilliant. It’s a long way north but I’m really pleased to have come and have found the networking very useful.
“As a festival organiser to come and meet other people who feel your pain and understand your difficulties has been really interesting.
“The Minister has a real passion for food but the difficulty for festivals is that they have a foot in both camps, they’re food and tourism and the difficulty we all have is grappling with that structure regarding funding and with different government departments.”
The message brought to the Seminar by food Minister Alun Davies was that the Welsh Government is targeting a massive 30 per cent growth in Welsh food production to £6.7 billion by 2020.
That’s a huge step up in Wales’s output of high quality beef, lamb and other foodstuffs from its current value of just over £5 billion.
Mr Davies, Minister for Natural Resources and Food in the Welsh Government, said: “We can grow the food industry and grow output by 30 per cent by the end of the decade – it’s about business growth and jobs creation.
The Minister also spoke about his recently launched draft action plan which aims to increase the profile and reputation of Welsh food and added: “I want to set a clear direction and specific actions so that Government and industry can work together to help the Welsh food and drinks sector reach its full potential.
“We have a good story to tell on food and drink, with Wales having experienced six percent growth in food and drinks sales last year and a combined turnover for agriculture, fishing and food manufacture of over £5.2 billion.
“I want these plans to help us build on this success.  That is why they include a particular focus on delivering green growth and creating jobs throughout the food chain.”
Mr Davies also addressed the issue of funding for festivals and added: “We evaluate the support we give to festivals and through that and understanding what works and what doesn’t we can understand what we need to do in the future.
“We seek to invest in festivals that promote Welsh food. Our funds are available to support food from Wales and I have to be very clear about that.”
He also paid tribute to the nation’s festivals and food producers and said: “In the USA I was recently asked about how we can guarantee the quality of our produce and I was able to hand on heart give this guarantee because we are aware and we know that what we produce is not just world class but world beating.”
Colin Loughlin said they had been delighted to have had such a good turnout and a very positive reaction from Food Festivals across Wales.
He added: “We saw the value of staging this seminar ourselves because all of us involved with food and drink in Wales face similar issues and challenges.
“We felt that bringing everyone together was a step towards creating an association of food festivals for Wales to give a strong voice to events which support and encourage tourism as well as our agricultural sector.
“One of the things we wanted to do was to mix people up so that although three people might have travelled together to get here they weren’t then sitting next to each other and so everyone had the chance to mix and meet people from festivals from different parts of Wales.”
The day-long event also saw workshops delivered by Welsh Government representatives from the food and tourism sectors as well as by experts on food marketing and events and producers.
Posted by llanblogger at 5:17 PM