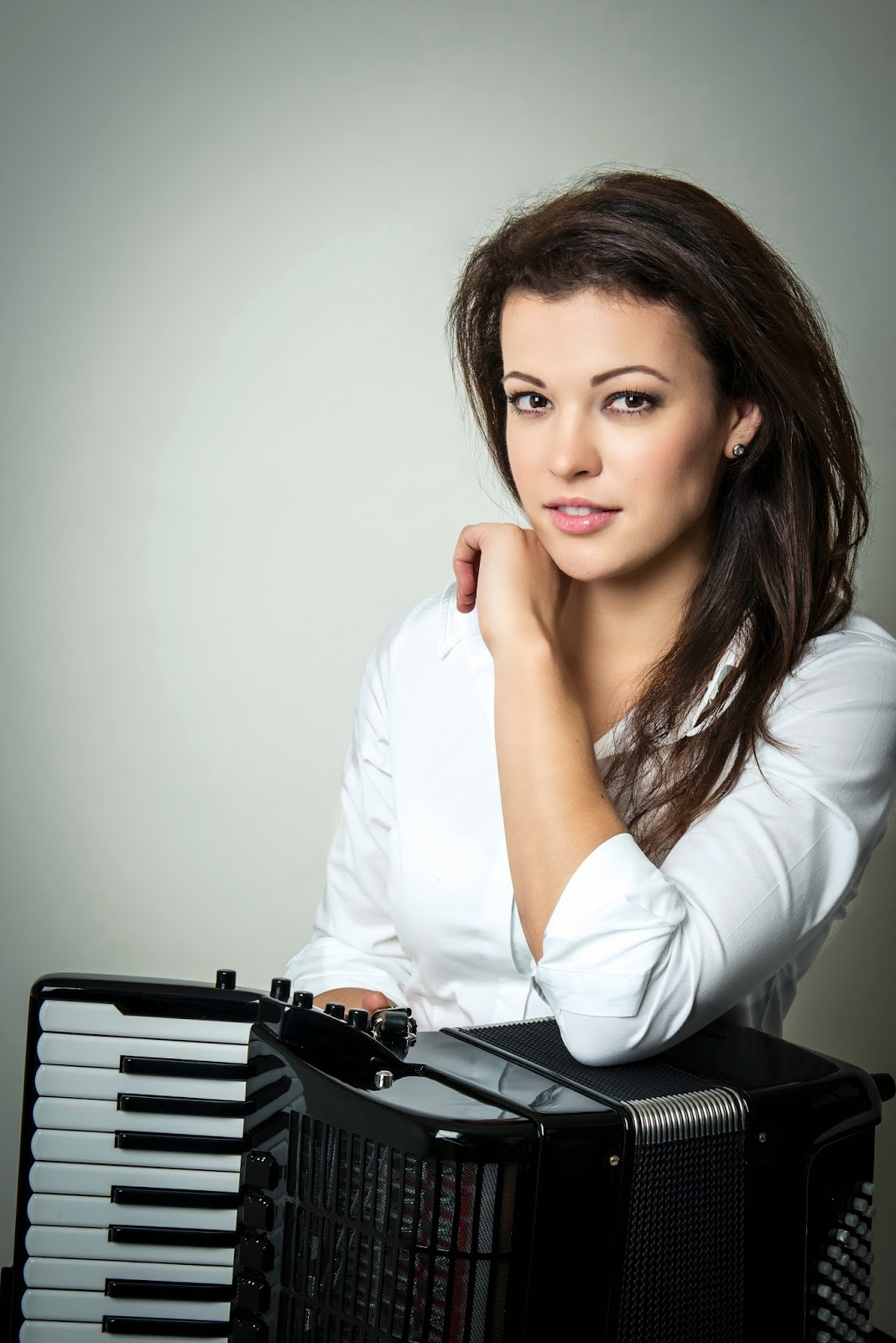 * Ksenija Sidorova is heading for Llangollen.

“I am on a mission”, declares Latvian-born Ksenija Sidorova as she talks about her appearance at the 2014 Llangollen International Musical Eisteddfod.

The classical accordion player, a former student of London’s Royal Academy of Music, says she wants to bring her instrument to the world and to audiences that simply don’t appreciate its versatility or true possibilities.

Ksenija, the ‘j’ is silent she is quick to point out in near perfect English, says she is honoured to have been asked to appear at the Eisteddfod having heard all about the festival from Bryn Terfel.

The Welsh bass-baritone knows Ksenija well, particularly after her success in being named, in 2012, the first international award winner of the Bryn Terfel Foundation.

Ksenija will be performing Karl Jenkins’ Adiemus Colores alongside acclaimed American tenor Noah Stewart and musicians such as Venezulan trumpet player Pacho Flores and a host of others.

She said: “I’m delighted to be having the chance to appear and perform under the baton of Karl Jenkins, who I admire so much.

“I’m really excited about the concert particularly as Bryn Terfel has told me so much about the festival and its wonderful history. It really will be an honour to perform in Wales again.

“I have worked with the BBC National Orchestra of Wales and performed at Bangor a few years ago but I haven‘t been to Wales for quite a while. And I have never been to Llangollen which I’m told is such a beautiful place.”

Ksenija, 25, was encouraged to play the accordion by her grandmother although she says her mum also plays a similar instrument.

She said: “My mum plays a Bayan, a type of Russian button accordion, while my grandmother plays a slightly different instrument. Both are nothing like the classical accordion I play which has a keyboard and not buttons.

“As a child my grandmother encouraged me to learn and play and I’m glad I did. It wasn’t quite love at first sight but there was always something about the instrument. My family is quite musical, my dad also plays the guitar, but they only really play for their own pleasure.

“I had a very serious music teacher and everything had to be absolutely right and I was a quick learner. Perhaps my path in life, my destiny, was already set out for me and the accordion.

“I also played the piano which had more of the cool factor about it that, perhaps, the accordion didn’t. Other children seemed to find the accordion funny but I was always, more and more, sort of drawn to it.

“It’s a wonderful instrument and can be so many things, cool, sweet, sexy, it can produce sounds to suit any mood. It’s almost there when it comes to being recognised as a truly classical instrument. We just need to finally secure its place with the general public.

“It is up to people who have fought for it to have its own identity and to gain its full acceptance to bring it to the world, so everyone can listen and hear its true potential.”

Ksenija says she is delighted to be able to fit the Llangollen International Music Eisteddfod into her busy concert schedule.

She said: “I have travelled extensively this last year with concerts in Morocco, Spain, Portugal and Kazakhstan to name just a few places; it’s been a really hectic year.

Ksenija moved to London from her native Latvia as she wanted to take advantage of more concert opportunities and the chance to study at the Royal Academy of Music.
She became a prize-winning undergraduate before receiving her Master’s degree with Distinction.

Awards and international competition successes have flowed regularly since 2009 and she is now very much in demand as a classical concert accordionist and has worked with a host of composers including Hans Abrhamsen, Samantha Fernando, Elspeth Brooke and of course, Karl Jenkins.

Always keen to promote the accordion, Ksenija manages to fit in outreach work at primary schools across the UK with the support of the Worshipful Company of Musicians.

And like many musicians Ksenija says she treats her instruments almost as human.

She said: “I have two accordions, both Italian and made by Pigini. They are delicate and I’m afraid I have to pay full adult fare on flights around the world for them. Whichever one I’m using travels with me and is placed on the adjacent seat.

“As an instrument they are far too delicate to be put in aircraft baggage holds and, at £20,000 each, too expensive to replace.

“A benefactor helped pay for one while the other I had to pay for myself through a lot of saving and hard work although my family helped too.

“Each has its own characteristics, despite being the same model, and sound, to me very different but each also becomes an extension of my being when I play.”

She added: “I am really excited about the Llangollen International Music Festival and working with Karl Jenkins. I think Colores is a magical mix of classical and Latin music which the audience will really enjoy.

“And if I can convert another audience into loving the accordion as I do, well, it will be mission accomplished in Wales!”


The curtain raiser for this year's Eisteddfod will mark the return of opera superstar Bryn Terfel to Llangollen.
The acclaimed bass baritone will be playing the lead production of Stephen Sondheim's Sweeney Todd: The Demon Barber of Fleet Street featuring a stellar cast including top tenor Wynne Evans.
This year's will also feature concerts by Dutch jazz sensation Caro Emerald and veteran British rockers Status Quo.
The Friday night concert, Spirit of Unity, will feature the Cape Town Opera, Africa’s premiere opera company, famed for their "vibrant vocalism and high-octane stage performances".
Appearing with them will be Wales’ representative in Cardiff Singer of the World, Gary Griffiths, the Wales Millennium Centre Only Kidz Aloud Chorus under the baton of celebrity conductor Tim Rhys Evans and British Sinfonietta, one of the UK's leading independent professional orchestras.
The Choir of the World competition for the Pavarotti Trophy on the Saturday night is the blue riband event of the week-long festival which will close with a Sunday night concert by Status Quo.
To book tickets ring the box office on 01978 862001 or go to the website at www.international-eisteddfod.co.uk
Posted by llanblogger at 9:39 AM