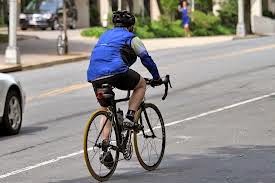 * The number of cyclists injured on the roads is on the increase.

The number of cyclists seriously injured has increased in recent years, faster than the increase in cyclists out on the roads.


In a bid to make things safer for cyclists, the Government is running a campaign called Think!
The campaign consists of a series of tips, developed to educate and remind drivers and cyclists about the correct way to drive and ride, and reduce the number of collisions on the road.

THINK! advice for when you're driving
* Look out for cyclists, especially when turning - make eye contact if possible so they know you’ve seen them.

* Use your indicators - signal your intentions so that cyclists can react.

* Give cyclists plenty of space when over taking them, leaving as much room as you would give a car. If there isn’t sufficient space to pass, hold back. Remember that cyclists may need to manoeuvre suddenly if the road is poor, it’s windy or if a car door is opened

* Always check for cyclists when you open your car door

* Advanced stop lines allow cyclists to get to the front and increase their visibility. You must stop at the first white line reached if the lights are amber or red and allow cyclists time and space to move off when the green signal shows


THINK! advice for when you're cycling
* Ride positively, decisively and well clear of the kerb – look and signal to show drivers what you plan to do and make eye contact where possible so you know drivers have seen you

* Avoid riding up the inside of large vehicles, like lorries or buses, where you might not be seen

* Always use lights after dark or when visibility is poor

* THINK! recommends wearing a correctly fitted cycle helmet, which is securely fastened and conforms to current regulations.
Posted by llanblogger at 7:48 AM