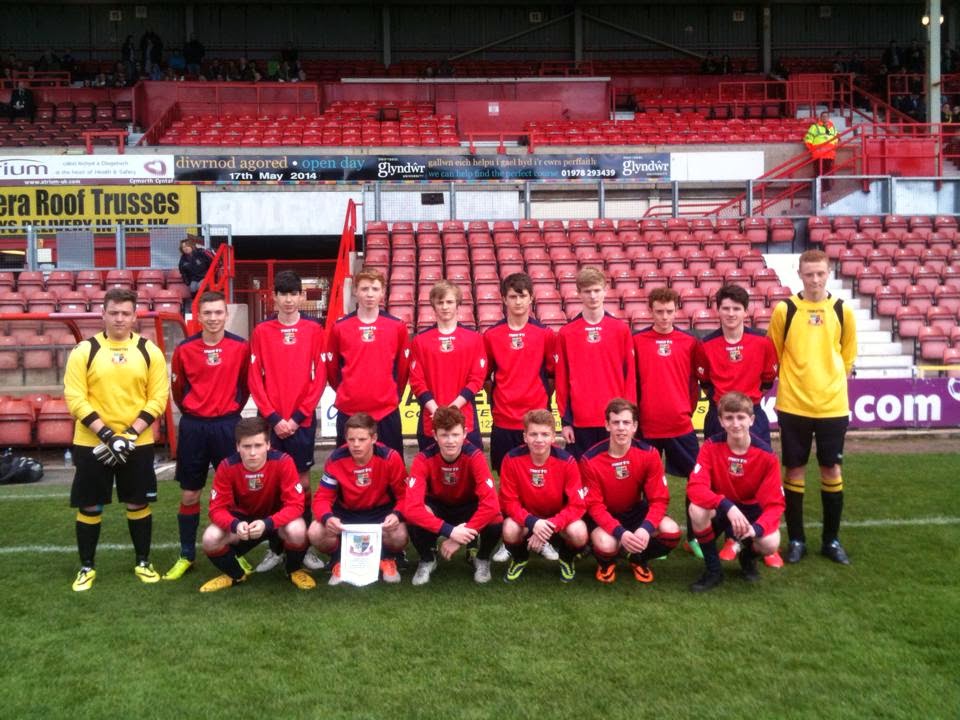 * Llangollen U16s line up at The Racecourse ground.

Saturday, April 26 2014 will stay forever in the memories of Llangollen Youth Under 16s players.

The team played the final of the Wrexham and District League Cup at Wrexham FC’s ground,  The Racecourse, only to lose 4-1 against a very good Ruthin Town side.

Llangollen started the game well and had a couple of chances thanks to Sam Gostage’s pace and Aaron Davies’s skills.

The game was evenly balanced for the first 20 minutes but then Ruthin started to control the midfield and their physical strength made it very difficult for Llangollen to play their own way.

Llangollen had to make one unexpected change as one of our reliable defenders, Nathan Butler, had to retire due to an ankle injury.

Luke Edwards, his replacement, played an excellent game but the lack of option on the bench to cover the back coupled with the huge size of The Racecourse pitch meant that players’ physical endurance and strength would eventually tell.

The first goal came from the midfield and a very good Ruthin move ended up with an easy tap-in.

Llangollen’s players suffered from the blow and Ruthin kept on putting pressure on their goal resulting in a deserved second barely 10 minutes after the first one and coming from a similar play.

In the meantime Llangollen’s first half goal keeper, Jacob Colley, made an unbelievable save to keep his side in the game.

The first half came to a conclusion with the scoreline 2-0 in favour of Ruthin.

The half-time talk was very much about raising the spirits of the players and to make them realise what a fantastic occasion it was. They knew they had to play the passing football they know best and that scoring the next goal could put them back in contention to win the trophy.

With new intent and purpose the players came back fighting at the start of the second half and took control of the game putting a lot of pressure on the Ruthin goal.

Following a scare in the first minute where our second half goalkeeper, Jack Carver, made a brilliant save, Llangollen were awarded a free kick about 30 yards from goal which their captain Tristan Lloyd dispatched to perfection. The Ruthin keeper managed to palm it away only for Sam Gostage to score from close range.

The roar that came from the stand where the Llangollen supporters were was amazing and lifted the team. Llangollen pushed for an equaliser and had a few chances but none of them fell kindly.

Ruthin had managed the storm and from their first chance in the second half scored a third from a badly defended corner. Llangollen tried to rally but their players had given everything.

Ruthin scored a fourth to give a final scoreline of 4-1 to Ruthin which was harsh on Llangollen.


Llangollen U16s players will play the final three games of their youth football in the next few weeks before sitting their GCSE exams.

It is a 10-year story that is about to finish but the run they had in the League Cup this year will stay with them forever.

Llangollen U16 has 17 players and is a Llangollen team only in name as just three players live in Llangollen.

The squad has survived only because other local teams have folded – this may be due to a lack of boys born in 1997-98, interest in other sports or more likely the advent of the Xbox.

Meuryn Hughes, Sam Gostage, Mark Jones, Tom Phillips and Euan Decourt made their grand debut for Llangollen Youth FC in September 2004 against Coedpoeth to be joined a couple of years later by Josh Brazier and Nathan Butler.

Other players came and went and although Llangollen was ‘lucky’ enough not to have many local rivals to fight players for, it was always a struggle to have enough reliable players to compete.

Chirk had a team in the early years but most of the players went to play for St Martins.

At the start of the U13s seasons, three years ago, St Martins also folded and Tristan Lloyd, Ross Briscoe and Rhys Kynaston joined the Llangollen squad.

The misfortune of some made the squad stronger and created the amazing bunch of lads that are Llangollen U16s today.

Llangollen Youth has never been renowned to be a ‘winning’ club, but more of a nice gentle club. However, over the last few seasons better results have come from some of the junior teams.

It is fair to say that the current Llangollen U16s were never considered title contenders, often winning the fair play awards at younger age groups, until this season.

A brilliant start to the league meant that for the first time Llangollen would be able to challenge for the honours. Their target from early on was the League Cup as the final would be played on Wrexham FC’s ground, The Racecourse.

Although some of the league results didn’t go Llangollen’s way and ended their title aspirations, their run in the league cup started with an away win against Rhosddu 2-1, followed by the only home tie this year and a win against Marford & Gresford 5-2.

Llangollen were now in the quarter finals and the draw put them against Garden Village, a team they never managed to beat.

Llangollen played the quarter final in the most surreal weather - sunny to start with then windy in the first half quickly followed by rain, hailstones and lightning in the second half.

The game had to be abandoned with nine minutes to go and Llangollen winning 2-1. The game was replayed three weeks later and they won it 1-0.

The final step to The Racecourse was a game against the other Ruthin team, Ruthin Blues, which proved to be a fantastic game which Llangollen won 4-3.

Llangollen’s trip to The Racecourse was booked and they went there in style.

They booked a team coach, all suited with club ties, and although they lost the final to a worthy Ruthin team they all came back to Llangollen to watch Llangollen vs Chirk while enjoying a BBQ.

It was a fantastic day with the weather being kind to us and made extra special thanks to the support provided by many people from a wide Llangollen area – the roar that came after our goal will stay in my memory forever. Thank you, thank you, thank you.

Never before had a Llangollen Youth team made the final of the league cup and as such this year’s Under 16s have made history. But with other fantastic teams coming up the age groups it won’t be long until another Llangollen team goes to The Racecourse and brings the cup back to town!
Posted by llanblogger at 4:50 PM