Royal Yacht crewman speaks of his exciting years aboard 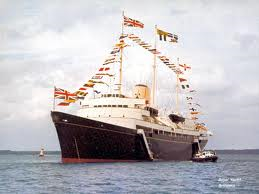 * The Royal Yacht Britannia in her heyday.


A man who spent more than a decade working there gave a fascinating behind-the-scenes tour of one Britain’s most famous royal residences to members of Llangollen Methodist Church recently.

The Royal Yacht Britannia is no longer in service but Andy Jones, who is now a postman in Oswestry, spent 11 years of his Royal Navy service aboard the “floating palace”, as he fondly calls her, serving almost every member of the Royal Family along a host of world statesman like Bill Clinton and Nelson Mandela.


Andy – nicknamed “Jonah” by his navy mates – was guest speaker at the latest meeting of the church’s This & That social group.
Recalling how he was inspired by the previous year’s Falklands War to join the navy in 1983, Andy trained at HMS Raleigh before serving aboard a warship as an officers’ valet.


He joined the Royal Naval crew of the Britannia in 1985 after answering an advert for stewards which was posted across the fleet.
Andy spoke of the famous ship’s compact dimensions, which saw all 240 of the ship’s crew crowded into the front section while everything aft of the funnel was royal territory.


He became one of a dozen stewards aboard and gradually progressed from serving senior crew members and royal staff to taking care of Royal Family members from princes and princesses to the Duke of Edinburgh  and the Queen herself in the latter years of his time in the Britannia before she was controversially withdrawn from service in 1997 to become a museum piece moored in Edinburgh.
During his time as a crew member he estimates that he circumnavigated the globe four-and-a-half times and calling at a huge numbers of foreign ports.


But because of the long working hours – all he recalls of Hong Kong is going briefly ashore to empty the royal dustbins  - it’s his time afloat that he remembers best.
One of his duties was to wait on tables groaning not just with the best food but also priceless royal possessions including the £500,000 Nelson Cup, awarded to the naval hero’s family by the nation after his victory at Trafalgar and, what he says was the Queen’s personal favourite piece, a table decoration consisting of two camels made from solid gold standing beneath a palm tree dripping with “dates” which are actually rubies.


In fact, so valuable were all the pieces on the yacht that an expert from Sotheby’s would come aboard at the start of every royal trip to make fresh insurance valuations of them in case any should go missing.
While the camels piece, given to her by an Arabian potentate, was the Queen’s most beloved piece of art, Andy, who would regularly serve her with it, recalled that her favourite tipple was a Royal Cocktail concocted from martini and a considerable quantity of gin.


But despite serving so many senior royals, he told his audience that the two most memorable guests he met aboard the Britannia were former US President Bill Clinton and the late South African President Nelson Mandela.

He told how he fondly remembered one day being overcome by the realisation that he was ironing one of Mr Mandela’s shirts  and about how he was frisked by two enormous American security men before being allowed to take in Mr Clinton’s breakfast tray one morning.
An anecdote which amused the audience concerned the time he had gone into the Duke of Edinburgh’s cabin to deliver his morning wake-up greeting and found himself unable to leave because the door had jammed.

As the duke took a shower in the adjoining bathroom Andy was desperately trying to open the door using a table knife from the royal collection when he felt a tap on the shoulder.


It was the Queen’s husband asking him what the b***** hell he was doing.
Andy said that like most crew members and members of the Royal Family he had been extremely upset to see the Britannia withdrawn from service after 43 years of loyal service and he recalled how the paying-off ceremony had been the only time in her long reign when the Queen had been spotted shedding a tear for the loss.
Posted by llanblogger at 7:31 AM