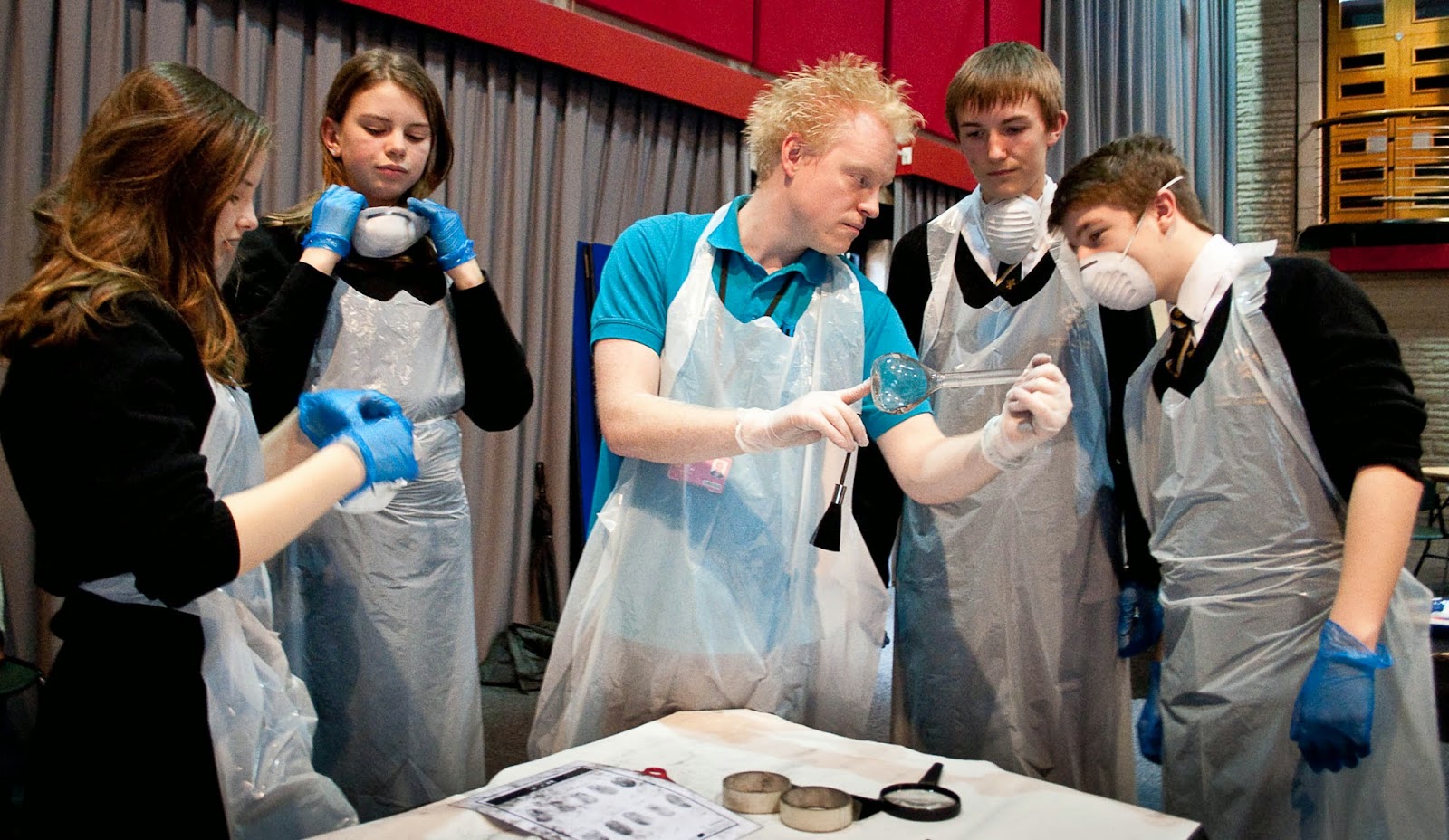 
A grisly murder took place in Llangollen – but school student sleuths soon had the culprit bang to rights.
In fact not only did they find out whodunit but they also came up with a flood survival pack, and built a wind turbine, a suspension bridge, an electricity generator and a robot.
It was just another day at school for 200 Year Nine and Ten pupils of Ysgol Dinas Bran, Llangollen, and Denbigh High School as they worked with industry experts from Airbus, civil engineers, and experts on robotics and forensic science from Techniquest in Wrexham.
They were at a special Science, Technology, Engineering and Maths (STEM) event at the Royal International Pavilion, organised as part of the Llwyddon’n Lleol programme, funded by the Welsh Government’s European Social Fund.
This aims to help young people across North Wales develop their career paths and the Pavilion event was designed to create awareness of the opportunities and the practical realities of the world of work.
The students worked with representatives of the aviation, construction, energy, science and technical industries to learn how they go about tackling practical problems.
These included studying flooding in Denbigh and coming up with a cheap and effective flood survival pack, building an indoor suspension bridge as well as an electricity generator, exploring atomic science, forensic science and robotics.
The day was hailed as a big success by Denbigh High School Curriculum Head Miranda Cookson who said: “We took Year Nine pupils who are in the process of picking their options for GCSE and Llwyddo’n Lleol have given them a real opportunity to work with STEM-based businesses.
“We want them to think about what sort of career they would like and the feedback from the children has been brilliant. They thoroughly enjoyed their morning there and would have loved to have been able to spend all day.
“It’s the sort of experience you can’t provide in school but through Llwyddo’n Lleol they have been able to get a real taste of hi tech industries.”
Ysgol Dinas Bran Deputy Head Teacher Mark Hatch was also pleased and said: “We have had the whole of Year Ten here and it’s been very worthwhile.
“As a mathematician myself it’s great to see how maths and science can be connected to the real world from flood risk management to robotics.
“The students have also been mixed up so they have had to work in groups with people they might not have worked with before and that involves other workplace skills of co-operation and teamwork.
“We’ve been involved in previous events provided by Jenni Edwards and Llwyddo’n Lleol and they have been very good as well and of great benefit to the pupils.
“We do computer programming and engineering at GCSE and here they can see the real life applications of those courses and there will be someone here today who wants to be a forensic scientist working on crime scenes and if we can inspire them then it’s great.
“When they next have a meeting with the careers adviser there should be things they can ask about.”
Mike Wellingtion, of civil engineers Martin Wright Associates, of Pulford, Chester, said it was a good opportunity to tell the students about the varied work involved in civil engineering, especially on the topical subject of flooding.
He had worked with the pupils on flood risk management in Denbigh and also in preparing a flood survival pack.
He said: “We are able to show them how we can work with the infrastructure and how people can make themselves more resilient in flood situations.
“It shows how we apply civil engineering to the problems of flooding and flood risk and schools see the value in that and events like this spread the word.”
Dinas Bran pupil George Fletcher, 14, of Froncysyllte, said: “It’s been very good and we’ve learned how to deal with flood risk and working in this area could be something I’d be interested in in future.”
Aaron Morrison, 14, of Rhosymedre, added: “It’s different from being in a classroom, it’s a different way of learning and it’s cool.”
Students from Denbigh High School also took part in the Royal International Pavilion event while a similar STEM day was held at Optic Technium in St Asaph for pupils of Prestatyn High School and Ysgol Glan Clwyd, St Asaph.
Both were organised by Jenni Edwards, Llwyddo’n Lleol Project Officer for Conwy and Denbighshire, and she said: “We want to get the students to understand the importance of STEM qualifications and of getting good grades and doing it through practical activities.
“It is vital in North Wales that we build a strong and skilled workforce because that will create a vibrant economy for the region and in turn create more opportunities for the future.
“We need young people who have the right skills, the skills that employers are looking for and events like this where they can work with professionals reinforces the message.
“They are meeting the people who do these things as their day job and tackling real life experiences and problems.
“They’re also seeing that employers don’t just look for qualifications but also for skills and social skills like the ability to work as part of a team.
“This has been very successful. The young people are enjoying it and enjoying the challenges and it gives them a lot to go back and think about.”
Posted by llanblogger at 7:53 AM