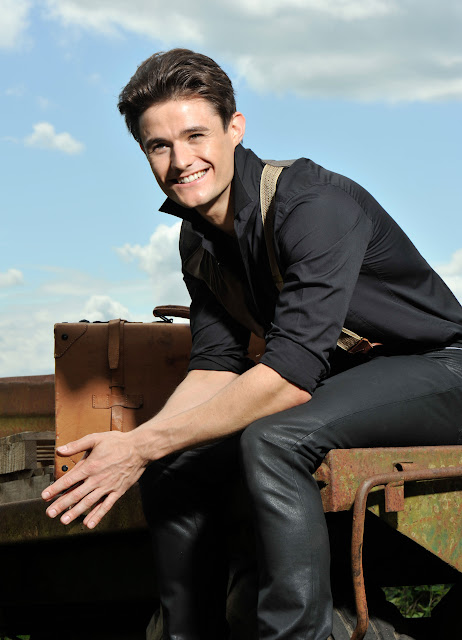 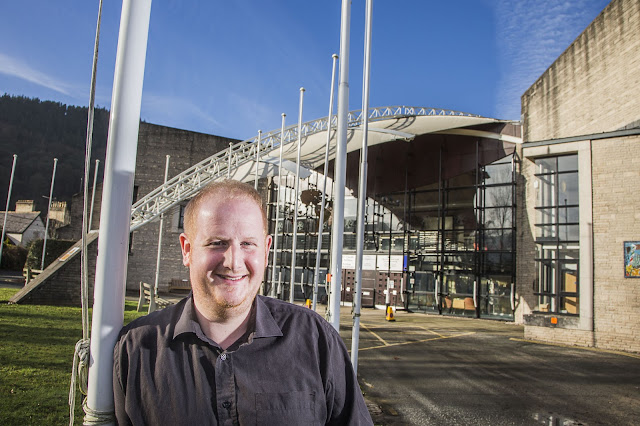 
West End star Mark Evans is appealing to folk dancers across Wales to represent their country against teams from around the world at Wales’s biggest international cultural festival.
Mark is currently touring the USA in the lead role in the smash-hit musical comedy The Book of Mormon but he took time out of his busy schedule – he is appearing in Seattle at the moment – to urge Welsh dancers to step up to the plate.
That’s because it will be strictly folk dancing as the Llangollen International Musical Eisteddfod introduces a major new dance prize to feature alongside its acclaimed Choir of the World event on the final night of competition this July.
Mark, from Llanrhaeadr, in the Vale of Clwyd, said: “Llangollen is a wonderful event with a tremendous heritage and it is a great experience to be a part of, whether singing or dancing.
“I would urge dance troupes from across Wales to hurry to be involved in this year’s International Eisteddfod and be able to showcase their talent to the world.”
The idea for the Saturday night dance finale is the brainchild of Musical Director Eilir Owen Griffiths who wants dance groups from across Wales to pick up the challenge and take on the world at Llangollen this year.
At stake will be the chance to go head to head on the stage with the best in the world for a major new international prize, the Dance Champions International Trophy and £1,000.
Eilir Griffiths said: “The Choir of the World competition is internationally recognised and we want to elevate dance to the same level by giving it a place on the stage on the big night, Saturday, July 13.
“We’re hoping to attract more dance groups from Wales and from across the whole of the UK and Ireland and so we have moved the two major dance competitions to the weekend.
“Dance plays a really important part in the Eisteddfod and brings huge colour, spectacle and atmosphere to the event every year with dancers from all over the world in their different costumes.
“We want it to really light up the weekend and have a real impact not just on the Saturday night but throughout the week and especially the weekend.”
The Eisteddfod’s two major dance competitions will be held at the weekend this year with the Choreographed Dance competition on Friday and the Traditional Dance on Saturday.
The winners of each will then dance off for the judges for the title of Dance Champions on the main stage at the Royal International Pavilion in a spectacular finale to the week’s competitions.
Eilir added: “The Eisteddfod has always boasted that it has the best in folk dancing and choral music from around the world but if it’s the best why isn’t there a best of the best competition for dance?
“For me it’s vitally important that competition in both art forms should culminate in the same way – on the stage on Saturday night.
“We want to reach across the dance community that there is another reason for them to come this year and having them there will bring the field to life and gives the dance groups something to look forward to.
“We regularly have dance groups from Turkey and Kurdistan, from Kenya and Ghana, from Ireland and from Europe and there will be major dance competitions taking place every day at this year’s Eisteddfod.
“It will start with children’s competitions on Wednesday with the cultural showcase on Thursday, the choreographed dance on Friday and the folk dance on Saturday and now with the added climax on Saturday night when we will crown the Dance Champions.”
This year’s dance categories are Cultural Showcase, Children’s Folk Dance Group, Individual Folk Dance under 16’s, Dancing in the Street, Traditional Folk Dance and Choreographed Folk Dance.
The Eisteddfod has also extended the deadline day for entries to the dance competitions to February 1.
As well as the new dance event there will also be a new Children’s Choir of the World competition; with the winning choirs from the Junior Children’s, Senior Children’s and Children’s Folk Choir competitions competing against each other,
There will also be a Conductors Prize for the most inspiring conductor from these competitions as well as a Music Directors Award given by the festival’s Music Director himself, Eilir Owen Griffiths.
Another first, aimed at solo performers, will be the Voice of the Future competition, open to under-35s and with a whopping £2,000 prize while the renowned Choir of the World competition for the Pavarotti Trophy, named for the great Italian tenor who first sang at the Eisteddfod as a boy, will now include the winners from the Youth Choirs competition.
This year’s event is from Tuesday, July 9, to Sunday, July 14, more details, including how to enter, are on the website at www.international-eisteddfod.co.uk and on Facebook at www.facebook.com/llangollen
Posted by llanblogger at 8:45 AM