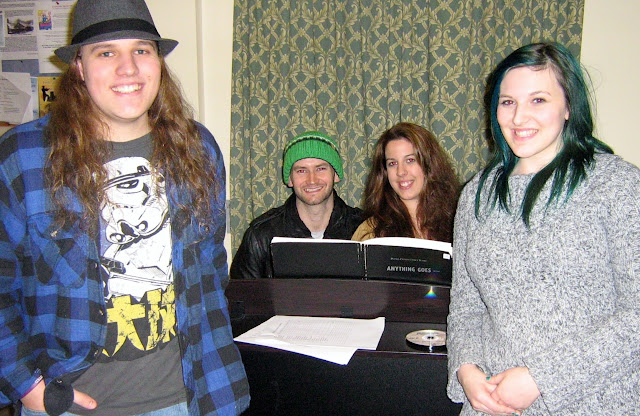 * Appearing for the first time with Llangollen Operatic Society will be, from left, Luke Meyers, Paul Bailey, Stephanie Cottam and Laura Haliwell.

LLANGOLLEN Operatic Society has attracted a record number of new faces for its next production, the evergreen Cole Porter musical Anything Goes.

Ten fresh performers will make their debut with the society when the show takes to the Llangollen Town Hall stage with a 30-strong cast from Tuesday-Saturday, April 16-20.
The story concerns madcap antics aboard an ocean liner bound from New York to London in the 1930s.
Billy Crocker is a stowaway in love with heiress Hope Harcourt, who is engaged to Lord Evelyn Oakleigh.
Nightclub singer Reno Sweeney and Public Enemy Number 13 Moonface Martin aid Billy in his quest to win Hope.
Taking the role of Billy Crocker is newcomer Paul Bailey from Sarnau near Bala, while local girl Dani Chamberlain – fresh from her success playing Wendy Darling in the Llangollen pantomime Peter Pan – will notch up an Operatic first playing Hope Harcourt.
Other Llangollen first-timers will be Steph Cottam as Bonnie, Luke Meyers as a steward, Brett Jones playing a photographer, George Nelson as another cameraman and Andrew Sully as the ship’s purser.
Andrew’s day job is vicar of St Collen’s Church, Llangollen, and he has previously appeared in productions for the town’s 20 Club drama group.


To prove the show will be a family affair, Andrew’s daughter Joanna Stallard is playing one of the Angels alongside Laura Haliwell and Alysha Cookson.
Show director Chrissie Ashworth said: “At a time when some other amateur societies are struggling to attract new members and some are actually closing it’s great to see we have so many new people appearing in Anything Goes.
“Most of the new members are also young people, which is also good to see as it is so important that societies like ours get new blood, enabling us to hopefully carry on for many years to come.”
Before signing on to play Billy Crocker, 33-year-old Paul Bailey had previously appeared in a number of amateur productions in Leeds and Manchester, mainly performing as tenor leads in Gilbert & Sullivan musicals.
He said: “G & S pieces are mostly singing so coping with lots of dialogue as I’ll have to do as Billy Crocker is going to be a bit of a challenge but I’m very much looking forward to doing it.
“Landing the role of the leading man was unexpected but is a fantastic opportunity.”
Director Chrissie Ashworth added: “The Llangollen society last performed Anything Goes in 1999 when it was a great success, so we’re all looking forward to doing it again.
“We chose it because it is a funny show with plenty of action and plenty of chorus participation.
“It also features lots of marvellous Cole Porter songs such as I Get a Kick Out of You, You’re the Top and It’s De-Lovely.”
Posted by llanblogger at 7:53 AM