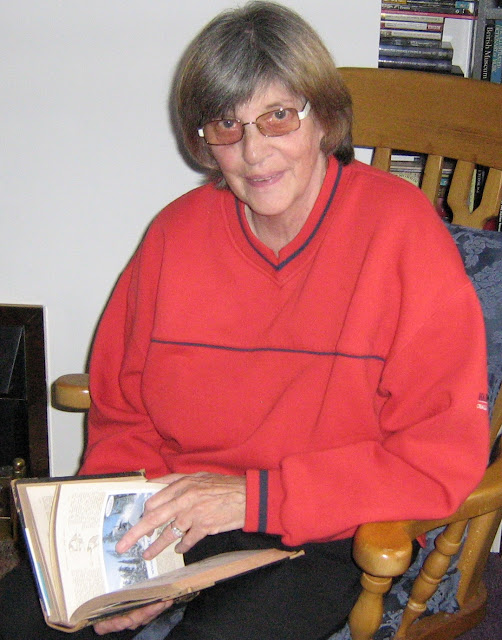 
A fascinating talk on crime in the Victorian era was given to members of Llangollen English Methodist Church’s This and That group on Monday evening.
It was delivered by local resident Pam Williams-Hughes, who was featured by llanblogger  last summer when at the age of 69 she gained a 2:1 BA Honours in History at Glyndwr University after battling against a brain tumour and lifelong dyslexia.
Victorian crime has become her specialist area and during her 90-minute talk she kept audience members spellbound with her vivid descriptions of wrong-doing in London, north Wales’s possible links with the infamous Jack the Ripper, one of Llangollen’s first resident policemen, a drunken 19th century Chester PC, the criminal justice system and what happened to children caught up in it.
After owning up to the fact that one of her own London ancestors was a criminal hanged at Tyburn, she gave the audience a start when she donned a hat and shawl to present a colourful portrayal of a Victorian “lady of the night”.
She did this to illustrate the fact that Mary Nicholls, one of Jack the Ripper’s prostitute victims, was charging clients just four old pence each simply to earn money for an overnight stay at a common lodging house.
Pam then related how her researches had suggested that the Ripper himself, who was never caught after his horrific crimes, may have come to live in the Anglesey village of Aberffraw where he later committed suicide and is now buried in the local cemetery.
In Llangollen, she said the 1841 census had revealed that one of the town’s first police officers, Richard Edwards, was at that time living in Church Street, aged 35, with his wife and children.
Later, the first police officer to “live over the shop” at the town’s new police station was a man with the memorable name of Humphrey Humphrey.
Another local connection with the law and crime was that Llangollen was at that time home to a large number of solicitors and barristers.
Pam then turned her attention to Chester where her researches had thrown up the intriguing character of John Hughes, who kept his job as a local bobby despite committing a lengthy catalogue of minor crimes during the 1850s and 1860s – following the 21st of which he was quietly allowed to resign.
Though not strictly a crime, Pam recounted how in the summer of 1870 the Berwyn hills near Llangollen were “alive with the sound of a serpent hunt”.
A reputedly monster-sized snake had been reported in that area and search parties were sent out to try and catch it.
As an aside, Pam suggested: “If our tourist trade ever drops off maybe we could start a monster hunt too.”
She then spoke of Llangollen’s link with an infamous murder – four-year-old Francis Saville Kent, whose body was found with the throat cut at his family’s home on the Somerset/Wiltshire border in 1860.
The boy's nursemaid was initially arrested for the crime but was released.

Five years later the victim's 16-year old half-sister, Constance Kent, confessed to the killing and was convicted and sentenced to death, but this was later commuted to life in prison.


The scandal forced his family to leave the area and move to Llangollen, where both the dead boy's parents are buried in the local churchyard.
The case has gained publicity recently due to Kate Summerscale's prize-winning book, The Suspicions of Mr Whicher, which was also made into a TV drama.

However, after her own researches, Pam said she believes Constance was innocent and that, in fact, her brother was the murderer.

Pam also aired her suspicions about the case of Abraham Thomas, a young man originally from Henllan, near Denbigh, who was hanged in Manchester at the age of 24 after being found guilty of the murder of his employer’s housekeeper in 1883.

Pam is so firmly convinced of his innocence that she is now seeking to obtain a posthumous pardon for Abraham.

Anyone convicted of a crime in Victorian times faced a very grim fate, either a date with the hangman’s noose – in public until the 1860s – for a wide variety of offences, or a term in prison, where they were forced to remain silent, exercise in a hood from which they could only look at the ground and work on tarred ship’s rope to earn their keep.

Penalties for convicted criminals were also harsh – including children, as Pam illustrated, by giving details of a 14-year-old boy who was handed a sentence of three days hard labour and a whipping for stealing two pairs of boots.

Pam was thanked warmly for her talk by This and That group members.
Posted by llanblogger at 11:33 AM