North Wales Assembly Member Mark Isherwood has called for a Welsh Government statement on the protection of public toilets.
This comes in the wake of the Welsh Senate of Older People’s ‘P is for People’ campaign to raise awareness of the lack of public toilet provision in Wales.
The campaign has gathered evidence from the general public and found that over half of the 799 people surveyed felt that the Welsh Government needs to take more action to protect existing toilets and to find ways of opening more toilets. 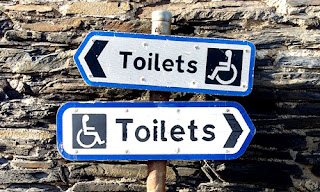 Calling for a statement on the campaign, Mr Isherwood said: “As the Minister will be aware, last month the Welsh Senate of Older People e-mailed all Assembly Members concerning the P is for People campaign to raise awareness of the lack of public toilet provision in Wales, and it attached its latest research urging all Assembly Members to bring this to the attention of the Welsh Government.
"It would therefore be appreciated if we could have a statement from the Welsh Government accordingly.”
The Minister for Finance and Leader of the House, Jane Hutt, replied: “I think that we would all agree and respond positively to the Welsh Senate of Older People’s call for improved public toilet provision.
"There are opportunities in terms of private sector engagement with this, in terms of access to toilets on the high street and in other public and private buildings. I am sure that the Minister will want to give an update on progress with this.”
Mr Isherwood said later: “Poor public toilet provision can lead to poor health, loneliness and isolation. T
"The Welsh Senate for Older People says that 'the Strategy for Older People in Wales focuses on wellbeing and promoting independence, but without adequate access to public toilets many older people are unable to take advantage of services as they are not confident of being able to go out without being caught short.'
“Public toilets are a lifeline, especially for older people, pregnant women and parents with young children, yet they seem to be disappearing rapidly from our communities.
"It is crucial that the Welsh Government take on board the findings of thethe Welsh Senate of Older People’s campaign and take action accordingly.”
Posted by llanblogger at 8:15 AM