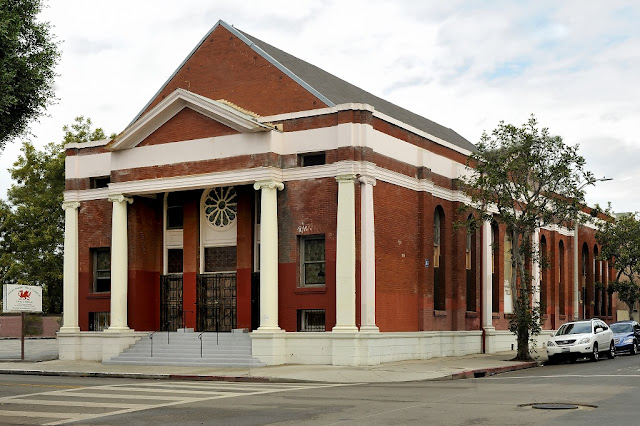 One of America’s most historic churches - where Oscar-winner Sir Anthony Hopkins attended a memorial service for his mother - has backed a major choral competition back home in Wales.
The Welsh Presbyterian Church of Los Angeles held its final service last month after 124 years but its legacy will support the Male Voice Choir competition at the world famous Llangollen International Musical Eisteddfod for the next three years.
The church was founded in Los Angeles in 1888 when the West was still wild and when the city had a population of fewer than 50,000 – these days it is the second biggest in the USA with nearly four million inhabitants.
It had a proud history too - its choir sang at the opening of the Golden Gate Bridge in San Francisco in 1938 and at the San Diego World’s Fair in 1935.
They also played a part in another piece of Hollywood history, singing and taking walk-on roles in How Green Was My Valley, which won the 1941 Best Picture Oscar and Best Director award for John Ford.
So it was a sad day when the last service was held on Sunday, December 16, according to Gwyn Phillips, (pictured below with wife Mair dressed for a St David's Day event) a retired insurance broker, now 81, originally from Cwmfelinfach, near Newport, and who emigrated to Canada in 1956. 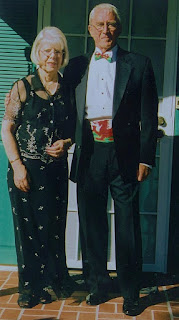 He met his wife, Mair, a Welsh-speaking nurse from Llysfaen, Colwyn Bay, there and they moved to LA in 1960 and have been there ever since, bringing up three children, David Wyn, Bryn Morgan and Glenda Elen.
Gwyn was an elder of the church and Mair a deacon and he said: “The church has been around for a long time but for the last five or ten years numbers have been declining and we weren’t really able to carry on.
“It was a synagogue and we bought it from the Jews in 1929 and now we’re selling it back to them as a heritage centre – it must be the only Welsh church with five or six Stars of David in the windows.
“We used to hold a regular Cymanfa Ganu and that was very popular and so was the three-day weekend eisteddfod we had and whenever there was a Welsh choir in southern California we’d try and invite them and we’ve had the Llanelli and Rhos Choirs here and the Three Welsh Tenors, Rhys Meirion, Aled Hall and Alun Rhys Jenkins.
“We even made the church earthquake-resistant in the 1980s and raised £250,000 ourselves to do it.
“We are at least glad that we have been able to support events like the Llangollen Eisteddfod – it was a must as far as we were concerned and we were delighted to be able to sponsor the make voice choir competition.
“Music and singing is all part of our heritage and even last year when Wales played England at rugby we went down to this bar and I counted 62 Welsh people there and we all stood to attention to sing Mae Hen Flad Fy Nhadau – even the English loved it.”
Eisteddfod Musical Director Eilir Owen Griffiths said:“While we’re obviously saddened to hear that this historic church has had to close we’re very grateful for their kind sponsorship and support.
“It’s a wonderful and very appropriate gesture that this church which has been attended by immigrants from Wales for well over a hundred years should support an international event back home in Wales – I’m sure the generations of Welsh Americans would approve.”
Gwyn and his wife, who was brought up at Plas Farm, Llysfaen, have visited Wales many times and Mrs Phillips still has three brothers and a sister living in Wales.
They say that the church, founded by the Rev David Hughes, from Llanwchllyn, near Bala, in 1888 when its 22 members met in the back room of a shop in Los Angeles, has been a big part of their lives and will be missed.
One of its members was Mary Griffiths, whose brother, Griffith J Griffiths, donated the 3,000 acres of Griffith Park to the city of Los Angeles – a journalist who made his money in gold mining, Griffith served two years in gaol after shooting his wife.
She survived but unsurprisingly divorced him and Griffiths, who had professed to be a teetotaler but turned out to be a secret drunk, died of liver failure but not before making further bequests to the city.
The church, in Valencia Street, has been a hub of Welsh life in southern California since then and Gwyn added: “We have been able to support a number of Welsh institutions, including the Llangollen Eisteddfod, the National Eisteddfod, the National Library and St David’s Cathedral, and they’ve been thrilled by the money we’ve sent them.
“As far as we’re concerned here, while that money is being used it’s working and doing something for Wales. That’s the important thing because it is Welsh money.”
A video of the Welsh Presbyterian Church in Los Angeles is on Youtube on http://www.youtube.com/watch?v=QmJ5Pt1FVeo
For more details on this year’s Llangollen International Musical Eisteddfod go to the website at www.international-eisteddfod.co.uk and on Facebook at www.facebook.com/llangollen
Posted by llanblogger at 7:47 AM