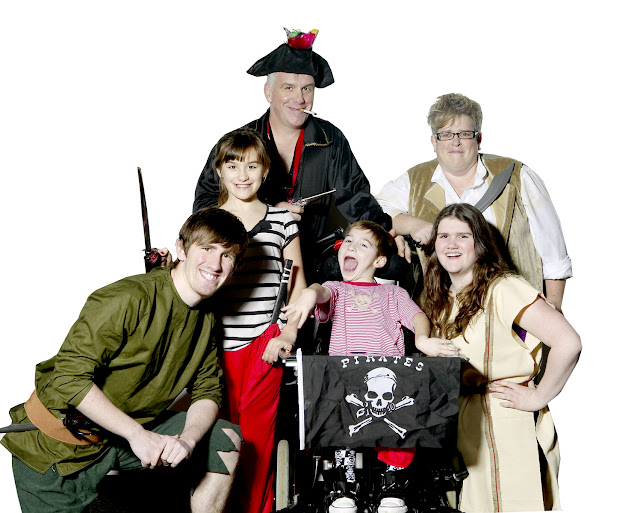 * Just some of the cast members of Peter Pan.


Where else, apart from panto, could you see a band of “Welsh” Red Indians dancing around their campfire swigging from cans of Wrexham Lager?
That was one of the more memorable scenes in Llangollen Pantomime Group’s latest production, Peter Pan, which was staged successfully at the town’s Pavilion from last Wednesday until Saturday.
Despite the snow which turned up on Friday, audiences flocked to see the spectacular show which pierced the winter gloom with a bolt of colour, music and sheer fun.


The Pavilion has an enormous stage yet at times it was filled to bursting point by the huge cast which appeared to comprise most of the under-18s population of the town.
Whether they were playing Indians, Lost Boys or Pirates, the legion of kids – all attired in the most colourful of costumes – sang and danced their way through the action to perfectly augment the efforts of the principals in this tale based (loosely) on the famous J M Barrie novel about the little boy who never grew up.
Shining brightly in the role of Peter was the powerfully-voiced Aaron Davies, while an equally admirable vocal performance came from Dani Chamberlain as Wendy, one of the Darling children who wing away with him to Never Never Land.
Jo Potts made an impish Tinkerbell, the chief fairy who guides the group of young travellers through their fantastic odyssey.
Peter’s adversary is the fearsome Captain Hook, who was portrayed by Tracey Rawlinson with the perfect amount of villainous intent and plenty of snarls at the audience.
Another star performance came from Justine Bradley as Chief Jones, the leader of those very Welsh Red Indians who knock back Wrexham Lager, wear red dragon-adorned headgear and have a talent for singing Tom Jones songs.
Comedy knock-about and banter was supplied by Jo Pearson and Ali Burke as a right couple of idiots, Me and You.
Other audience favourites were Mr and Mrs Darling played by Dean Richards and Tessa Orton-Jones.
In what was definitely a family affair, the role of the Dame – Nanna – was taken by Simon Orton-Jones who also directed the show and penned the script with Nico Decourt.


Peter Pan was a credit to everyone who appeared on stage and the equally talented band working behind the scenes led by producers Sharon Jones, Jo Potts and Elaine Morris.
Posted by llanblogger at 11:12 AM