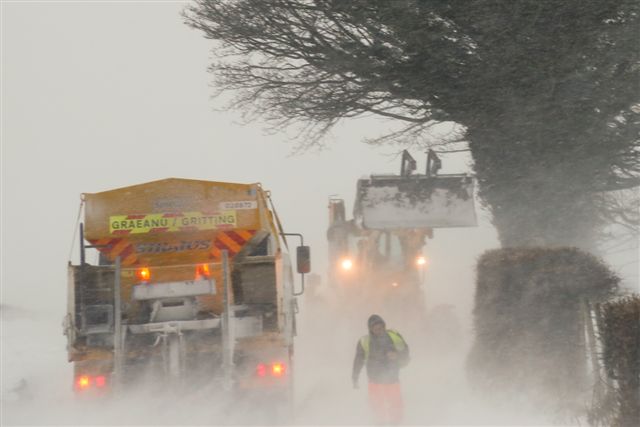 Denbighshire County Council says its highway crews and some additional contract JCB's have been working almost continuously throughout the weekend to keep the major routes open and yesterday they branched out onto the more minor roads.

Apokesperson said: "The A5104 between Llandegla and Bryneglwys was particularly badly affected and we weren't able to get this open until Sunday morning.

"Agricultural contractors have been drafted in to clear snow from many of the rural roads and these proved effective except where there were deep drifts.

"We have a snow blower on hire and the JCBs are continuing to work on those locations.

"Overnight there has been further substantial snow in some places so this has obviously added to the workload."

Cabinet Lead Member for Environment, Councillor David Smith, said: "It's fair to say that resources have been stretched in this cold snap but I would like to thank our highways crews for working round the clock to keep the network open throughout most of the county.

"Today we have gritters out salting the more minor roads and we are still using agricultural contractors where appropriate.

"These are most effective where snow is over about three inches deep so we are being selective in how we use them.

"We are also continuing to respond to specific welfare needs.

"In addition we are also salting in the urban areas of Denbigh, Ruthin and Llangollen and this work too will branch out to other communities as and when we can."

* llanblogger would like to know if you are happy with the way the council handled the snow. Send your views to: llanblogger@gmail.com
Posted by llanblogger at 11:54 AM