A new law has come into force in Wales banning the display of tobacco in supermarkets and other large shops. 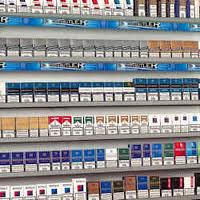 It is hoped the ban will help reduce the take-up of smoking among young people, who can be tempted to take up smoking by seeing cigarettes on display.
The display of tobacco products can also tempt adults who are trying to stop smoking. The law will extend to smaller shops, including specialist tobacconists, in April 2015.

Since Monday large retailers have no longer been able to have cigarettes and other tobacco products on display, except when staff are serving customers and carrying out tasks such as restocking.

Tobacco price lists will also look different. A plain A3 price list with no tobacco branding can be shown at the point of sale, with an illustrated price list available to customers on request. Customers may be asked for proof of age before being shown the illustrated list.

Non-compliance with the new law, which will be enforced by local trading standards officials, is a criminal offence. Anyone found guilty could face a fine of up to £5,000 or up to two years in prison.

Health Minister Lesley Griffiths said: “Smoking remains a huge risk to public health in Wales. Around 20 per cent of our NHS admissions are related to smoking, at a cost of more than £1million a day.

"Our aim is to reduce smoking levels in Wales to 16% by 2020 with an ultimate vision of a smoke-free society, in which the harm from tobacco is completely eradicated.

“We know that young people can be influenced by seeing cigarettes on display, and that they can tempt adults who are trying to give up the habit.

“We see this new law as an important part of our drive to tackle the harm caused by smoking. If we can prevent young people from ever taking up smoking, we can give future generations a better chance of a healthy life.”

The Welsh Government has a range of initiatives designed to tackle smoking and exposure to second-hand smoke. These include the Fresh Start campaign, which is targeting smoking in cars carrying children and offering Fresh Start packs for those who wish to give up smoking.
Posted by llanblogger at 8:26 AM