10,000 tested for drink driving in region

A campaign to crack down on drink driving and driving under the influence of drugs over the Christmas period has seen almost 10,000 breath tests being administered in North Wales in just over two weeks. 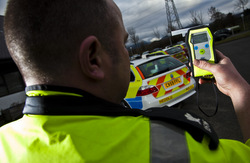 So far over 50 people have been arrested after drivers failed breath tests in roadside stop checks as part of the All Wales Anti Drink Drive campaign that begun on Saturday 1st of December.

Chief Inspector Darren Wareing from North Wales Police’s Roads Policing Unit said: "We announced at the start of the Wales Christmas Drink Drive Campaign that we would be out and about, in force, targeting drink drivers/riders.
“Many people don’t realise they can still be over the limit the morning after a drinking session. We would urge everyone to think twice before getting behind the wheel the morning after and consider making alternative arrangements to get to work.”
“Despite the warning that we would be out and about, in the first two weeks of the campaign, over 50 motorists have been arrested. If convicted, each will be disqualified from driving for at least 12 months; face a heavy fine and many could lose their jobs. Drink drivers are a danger to themselves, their passengers and other road users. We will continue to conduct high profile roadside checks and use intelligence to identify offenders. Please heed the warning."
North Wales Police are also using the campaign to reinforce Operation Sodium, a campaign which was launched during the summer, in response to the growing number of young people who are involved in collisions linked to drink or drug driving, and in particular in rural areas of the force.
Chief Inspector Wareing added: “Younger drivers tend to take more risks and this is a cause for great concern. Operation Sodium is aimed at reducing the number of young drink-drivers and those who drive whilst under the influence of drugs, who are putting their lives, and the lives of other road users, at risk on our roads.”
If you know of someone who regularly drinks and drives, or if you suspect someone who is behind the wheel whilst under the influence of alcohol, contact North Wales Police on 101, or Crimestoppers anonymously on 0800 555 111.
Posted by llanblogger at 3:06 PM