This Christmas police across Wales will be targeting drivers, and in particular young drivers, who risk their lives and the lives of others by driving whilst under the influence of alcohol or drugs.
Led by South Wales Police, the month-long Christmas Anti Drink and Drug Driving Campaign will run from Saturday 1st December through to 1st January, and will see officers from across the country conducting high profile roadside checks and using intelligence to identify offenders. 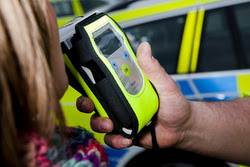 Last year in Wales, police tested a total of 27, 744 motorists as part of the campaign, with 545 individuals (2%) returning either positive results or failing/refusing to take a breath test.
Chief Inspector Darren Wareing, who is in charge of the North Wales Police Roads Policing Unit said: “If you drink and drive this Christmas you significantly increase the risk of killing an innocent person, or yourself or both. It is really that simple.
“Many people don’t realise they can still be over the limit the morning after a drinking session. We would urge everyone to think twice before getting behind the wheel the morning after and consider making alternative arrangements to get to work.
“Drivers need to be aware that regardless of the time of day they are caught, whether they are going to work or taking children to school, they will face the same penalties as someone who has chosen to drink heavily in a pub and driven at night.”
North Wales Police will also be using the campaign to reinforce Operation Sodium – a campaign which was launched during the summer, in response to the growing number of young people who are involved in collisions linked to drink or drug driving, and in particular in rural areas of the force.
Chief Inspector Wareing added: “Younger drivers tend to take more risks and this is a cause for great concern. Operation Sodium is aimed at reducing the number of young drink-drivers and those who drive whilst under the influence of drugs, who are putting their lives, and the lives of other road users, at risk on our roads.
“There is a perception out there that drivers in rural areas believe they have less chance of getting caught drunk behind the wheel which we are going to change. People should be aware that we will continue to patrol rural roads in targeted operations to catch drink/drug drivers.”
Sue Storch, Chair of Road Safety Wales said:“My advice is that if you’re expecting to drink alcohol during the Christmas holiday, plan how to get home without driving. Don’t offer an alcoholic drink to someone you know is planning to drive and don’t accept a lift from a driver you know has drunk alcohol.”
A hard-hitting television advert highlighting the consequences of drink driving will also be shown throughout December as part of the Department for Transport’s THINK! Christmas drink drive campaign.
If you have information relating to someone you think is driving whilst under the influence of alcohol or drugs, please contact North Wales Police on 101 or via Crimestoppers Wales anonymously on 0800 555 111. In an emergency always dial 999.
Further information regarding the penalties for drink or drug driving are available in the ‘Advice & Support’ section of the Force website