Historically, incidents of domestic abuse increase over Christmas, when the pressures of family and money and an increase in alcohol consumption place additional strain on relationships.
A publicity campaign which highlights Domestic Abuse at Christmas time has been launched by the Welsh Government and it has the full support of North Wales Police.
Domestic abuse happens all year round, however research indicates there is a strong link between alcohol consumption and domestic violence.
Detective Superintendent John Hanson from North Wales Police said: "I want to encourage victims to report incidents of domestic abuse so together with our partner agencies we can access appropriate support and intervention for these victims and their families.
“Christmas is a special time when families should be enjoying the festive season; I want to inform any victim of domestic violence, that we have dedicated domestic abuse officers and public protection officers across North Wales who will ensure that all domestic abuse crimes are investigated, as well as providing support and information to victims about police procedures and legal proceedings."
Domestic abuse is happening every day in every part of the UK and one incident of domestic abuse is reported to the police nationally every minute. One in four women and one in six men will be affected at sometime in their lives.
As part of their campaign the Welsh Government has launched a television advert and a poster using the slogan‘Don’t just wish for it to get better,’ which is being aired in the run up to Christmas. Social media is also being used to highlight the campaign.
If you are living with domestic abuse, North Wales Police encourage you to come forward. You will be treated with compassion and dignity. You will be believed and your complaint thoroughly investigated. We are committed to giving you the support and assistance to live your life free of fear.
Further information and advice regarding Domestic Abuse, together with links on how agencies can help you, is available via our Advice and Support section. 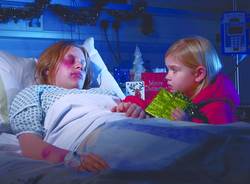 Posted by llanblogger at 4:37 PM