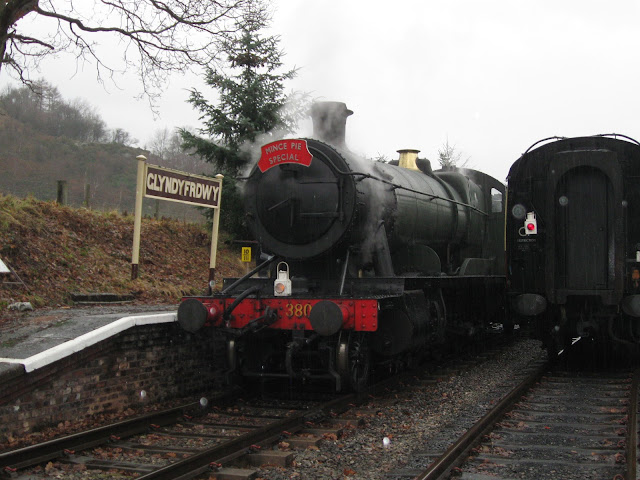 * The locomotive No.802 at Glyndyfrdwy where
the Mince Pie Specials are temporarily terminating
due to a riverside landslip.
A riverside landslip has led to the temporary reorganisation of seasonal train services on Llangollen Railway.


Railway officials discovered on Boxing Day that a short section of banking had fallen into the river just west of the station at Glyndyfrdwy where the heritage line runs close to the river.


For safety reasons they immediately suspended services between Glyndyfrdwy and Carrog.


Railway spokesman GeorgeJones said:  “Pending further investigation of the situation, and any potential for the landslip intruding on to the track, the decision was taken to terminate the winter-time series of Mince Pie Special trains from Llangollen at Glyndyfrdwy.”


Railway chairman, Jim Ritchie, said:  “Llangollen Railway regrets the disruption to visitors' plans for visiting the Dee Valley for the train ride through to the terminus at Carrog.


“The riverside situation requires a detailed assessment as to the repair which may be needed, but we will be unable to put this in hand until after the New Year period.


“In the meantime, we trust our visitors will still enjoy the shorter run by steam train through to Glyndyfrdwy and take advantage of the opportunity to explore the Welsh countryside."


Train time departures from Llangollen have been revised to start 11.15am, 1.15pm and 3.15pm through to the end of the festive season services on  January 1.
Posted by llanblogger at 10:56 AM