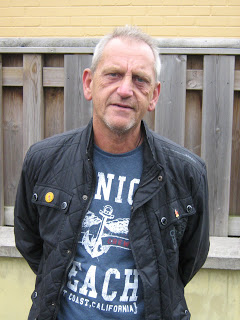 * Survivor - Kelvin "Kelly" Davies.
A HILLSBOROUGH survivor fsys news that fresh inquests are to be held into the deaths of 96 Liverpool fans who died in the 1989 disaster is an “early Christmas present” for relatives.
Yesterday, the High Court quashed the original inquest verdicts returned on those who died in the crush which developed on the terraces at the Shefffield stadium.
The Lord Chief Justice Lord Judge also ordered fresh inquests following an application by the Attorney General.
And, in a separate development, Home Secretary Theresa May has announced a new police inquiry into the tragedy.
These moves have been welcomed by 56-year-old Kelvin “Kelly” Davies, who narrowly survived death himself and had to be carried unconscious from the terrace on an advertising hoarding which fellow fans had ripped from the side of the pitch.
After being given emergency first aid he came to surrounded by dead bodies in the stadium’s gym, which was being used as a makeshift mortuary.
Mr Davies, who  works as a machine operator at the Dobson & Crowther factory in Llangollen, still has flashbacks of a young boy dying right next to him as they both lay fighting for breath on the terraces.
He said of yesterday’s developments: “This is very good news for the relatives of those who died and for the survivors – it has come as an early Christmas present for us.
“It has taken a long time for this to happen but at last it has and these are two important steps on the long road to final justice.
“As a survivor of that day I have gone through hell over the past 23 years, so god knows what the relatives of those people who died have had to endure.
“It’s as though the 96 who died were just swept under the carpet and didn’t mean a thing.”
He added: “I was at the original inquest and sat there for two days without being called and now I intend to take some time off work to attend the new hearings.
“It would be marvellous to see the inquests this time go in favour of the families.
“Two or three years ago you’d never have dreamt that things would develop like they have today but we’ve had some good people helping us out.
“They’ve been prepared to step up to the mark and demand something is done to set the record straight at last.
“Hopefully, when this new legal process is over someone will be held accountable for what went wrong that awful day.”
Posted by llanblogger at 8:35 AM