* Now with county council response at foot of story. 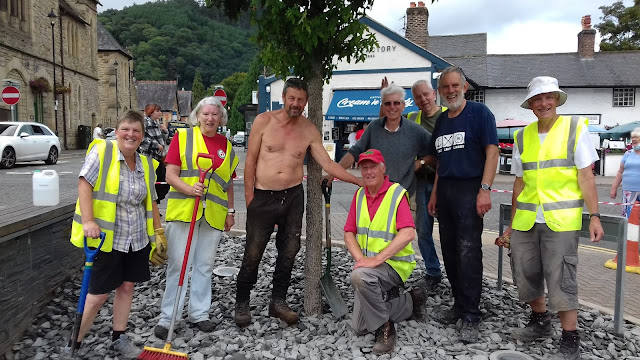 * Members of the Tidy Town Team at work on Centenary Square last September.

The leader of a busy Llangollen voluntary group has strongly criticised Denbighshire County Council (DCC) for its “neglect” of the town.

The Tidy Town Team has completed thousands of hours of unpaid community work on jobs ranging from litter picking to marshalling traffic for the international musical eisteddfod since it was set up in 2006.

But in the team’s 2021 annual report its founder and co-ordinator David Davies attacks the county council on a number of counts, including 'withdrawing' its annual funding.

He writes:  “Working within Covid-19 regulations the team has continued to meet at least once a month throughout the year.

“With litter easier to see, our litter picking activities are concentrated in the winter months. Areas covered this year included the canal and riverside from Horseshoe Falls to Wharf, Dinas Bran Castle Hill and roadside approaches to the town.

“Regretfully this year we have been in receipt of written objections from Street Scene Supervision at DCC to some of litter picking activities.

“In retaliation, after years of supporting us, they refused to pay our annual insurance costs of approximately £100 this year and have withdrawn the final funding we receive from DCC.”

Later in the report Mr Davies says: “Unfortunately it is increasingly easy to see DCC’s neglect of the town and that much maintenance is needed.

“Efforts by the team and others who care have been met with excuses for non-action by DCC of Covid restrictions, or no money, or shortage of staff.

“The town and Llangollen council taxpayers are entitled to and expect far better service from DCC.”

In the report Mr Davies gives a general picture of what the team has achieved over the past 12 months.

He says: “We have continued to support the Llangollen Health Centre with traffic management on vaccinations days, roadside hedge cutting by the surgery and have given all the outside furniture at the centre a refreshing treatment of wood preservative.

“Our contract continues with the Town Council to maintain tidy the town’s Centenary Square.

“As a special project this year we replaced the grassed covered area at the corner of the square that was being abused by humans and dogs. With professional guidance we dug out and prepared the base area and in-filled with local slate chips from Berwyn Quarry.

“Some members of the team, in partnership with Ysgol Dinas Bran, have enhanced part of the footpath by the school up to the castle with new hurdle fencing, whilst other members have undertaken repairing some stiles along our public footpaths on the edge of town.”

He adds: “In Cemetery Woods, an area between Llangollen railway station and the river, in partnership with the church, we have continued tree and shrub clearance and erected a temporary post and rail fence to protect the growing young yew hedge planted along the cliff edge. We have now started to identify a circular pathway around the area and planted five young Welsh oak trees.

“A big thank you to all our supporters and to the team members for collecting this year another 53 sacks of litter and yet again contributing over 500 hours of work effort to benefit the town.”

A spokesperson for Denbighshire County Council said: “The Council is committed to maintaining and improving the town and surrounding area for the benefit of the community and visitors to Llangollen.

“We have worked closely with the Llangollen 2020 group and listened to residents and businesses to introduce improvements in the town centre area.

“Work on the Llangollen 2020 Project has been underway since October 2021, following extensive consultation and engagement around the town.

“When completed the project will provide more space for pedestrians through the construction of wider footways using natural stone paving materials; and improved pedestrian crossing facilities making it easier for pedestrians to walk around the town centre, while upgraded traffic signals will improve the flow of vehicles.

“The Council is committed to continuing its regular maintenance in the town and surrounding area to maintain areas, and no reduction in service has been implemented in Llangollen.”