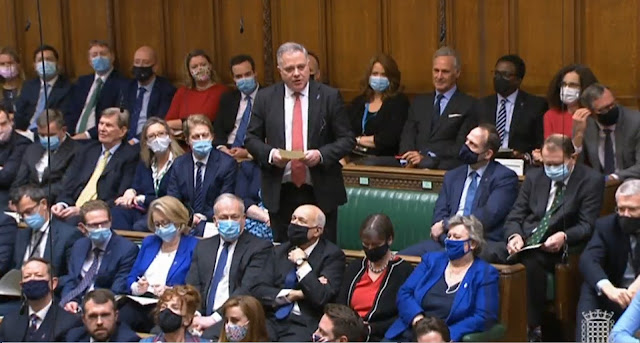 Clwyd South MP Simon Baynes has raised the issue of the Welsh Labour Government’s funding of the Newbridge Road repairs in Parliament.

And he asked Boris Johnson during yesterday's Prime Minister's questions to comment on how the next phase of Levelling Up Funding will bring hope and prosperity to communities in Clwyd South and elsewhere in the UK.

Mr Baynes said: “In Clwyd South the Welsh Government has been dragging its feet on funding urgent repairs to the Newbridge Road while, in contrast, the Prime Minister and his government have delivered record Levelling Up Fund investment of £13.3m along the Dee Valley from the Trevor Basin to Llangollen and Chirk and on to Corwen.”

At Newbridge Road vital infrastructure was damaged in February 2021 due to flooding on the B5605 between Newbridge and Cefn as a result of a landslide.

This severed the link between the two communities and the wider settlement areas of Chirk, Plas Madoc and Ruabon.

The Welsh Government has recently confirmed funding of £175,000 to make technical studies with regard to repairing the extensive damage caused.

The successful Clwyd South Levelling Up bid was sponsored by Mr Baynes and is a cross-county project, developed by Wrexham County Borough Council and Denbighshire County Council.

It consists of three projects - firstly, the implementation of the Trevor Basin Technical Masterplan which will ensure the World Heritage Site realises its full potential on a national and international level to attract visitors and catalyse economic growth in neighbouring communities.

The second project is mainly focused in Denbighshire and supports cross-border visitor connectivity in the Dee Valley at the Horseshoe Falls, The Four Great Highways and Plas Newydd in Llangollen; Wenffrwd to Llangollen Active Travel Corridor including the old Railway Line and Chirk.

The third project will focus on the Corwen area, creating a new and improved Western Gateway to the Dee Valley and World Heritage Site. This project will improve visitor connectivity and infrastructure, Corwen town centre assets and the area between the railway station and car park, including a new platform canopy. It will also enhance the visitor experience with onward linkage to Llangollen and Cynwyd, effectively creating a new, improved and complementary visitor entry point to the World Heritage Site.

In response to Mr Baynes’ question, the Prime Minister said: “I thank my hon. Friend very much and what pleasure it gives me to address the Member for Clwyd South, where I tried unsuccessfully so many years ago. And I’m delighted that a Conservative Government is now investing so massively in Levelling Up in Clwyd South and across the whole of Wales.”

Speaking later, Simon Baynes MP said: “I was very pleased to highlight the issue of the urgently needed Newbridge Road repairs and the Levelling Up Fund investment of £13.3m in Clwyd South.

"I recently visited the landslip on the Newbridge Road where I saw first-hand the damage that has been caused on the road and where I used the opportunity to call on the Welsh Government to urgently conduct essential repairs. It is astonishing that the Welsh Government has taken so long - almost a year - to react and there can be no further delays on their part in making sure these repairs are done as fast as possible.

“I was also very glad to highlight in PMQs the investment by the UK Conservative Government in Clwyd South via the Levelling Up Fund which will not only provide jobs and a much needed economic boost to Clwyd South but also improve the well-being of our residents by widening access to recreation, outdoor and other amenity activities. They will also celebrate the amazing history, language and culture of our part of Wales and bring them to a wider audience.”

Asked by Sam Rowlands, North Wales Conservative SM, about Mr Baynes' question on Newbridge in the Senedd yesterday Lee Waters, Deputy Minister for Climate Change in the Welsh Government, said: "Yes. I noticed it was raised both in First Minister's questions and in Prime Minister's questions by Simon Baynes - erroneously, because he's blaming the Welsh Government for something that is the responsibility of the local authority.

"I understand the temptation to play politics on this, but he ought to do his homework a little better before casting aspersions.

"We are in discussions with the local authority. We want to help them to solve this problem, but it's for them to put in the right application, to the right fund, in the right way. I think it's unfortunate that Sam Rowlands joins the bandwagon of placing blame at our door when it doesn't properly belong here.

"That said, we recognise the problem this is causing to the local community and we want to be part of finding a solution. The leadership for this belongs properly - as a former council leader, he will recognise—with the local government, and we hope to work along with them to try and find the solution as quickly as possible."

* On Thursday afternoon Mr Rowlands, Shadow Minister for Local Government, said he was appalled at the comment and accused the Welsh Government of shirking their responsibility.

Speaking in the Welsh Parliament Mr Rowlands, said: “The closure of this road for more than a year now has had a huge impact on local people, who now have to take longer journeys. This is a significant issue for them, adding 15 miles and up to 30 minutes to their journey, while of course also adding to their carbon footprint.

“I did write to the Minister on 23 November regarding the damage to the B5605 between Cefn Mawr and Newbridge, caused by storm Christoph. I wrote again last week but I've yet to receive a response to any letter. The repair works to the road are expected to cost around £1 million, and 12 months after the storm, the only progress that appears to be made is that Welsh Government approved money to carry out a preliminary assessment.”

South Wales based, Labour Welsh Government Minister Lee Waters labelled questions about the closure as “playing politics” and said it was the responsibility of the local authorities.

Mr Rowlands added: “I am quite frankly amazed that the Welsh Government is still not taking this issue seriously and expecting Wrexham council to foot the bill for something on this scale. My colleague in Westminster, Simon Baynes, MP for Clwyd South has also raised this matter in Parliament.

“Last week Cefn Mawr’s Labour councillor said they would need help to repair the damage to the road and said they had done all they could to get things moving.

“People living in this area and affected by this road closure deserve better. We all know that Labour’s Cardiff-based Welsh Government ignore North Wales, but you know it’s bad when they can’t even agree with their local councillors.”