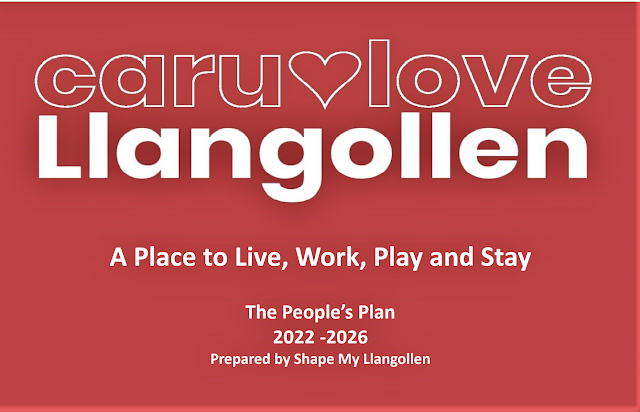 Royal Mail has been blamed for failing to deliver almost 1,500 postcards reminding every household in the town to have their final say on Llangollen’s People’s Plan.

And the leader of the organisation which has prepared the blueprint for how life and work in the area can be improved over the next four years has therefore decided to extend the deadline for feedback by a further two weeks.

Known as Caru Llangollen, the plan has been prepared by a team of volunteers from Shape My Llangollen (SML), under the auspices of the town council, with the aim of providing a comprehensive vision for the town between now and 2026.

The suggestions in it are based on what the group was told by the people of the area in a series of pre-pandemic public consultation sessions when they were asked about what they liked or didn't like about the town and how they reckon it could be improved.

And, based on what they were told, the volunteers produced the final draft of the plan which contains around 90 proposals for improving Llangollen and its quality of life and work up until the year 2026.

SML is now in the process of putting the People's Plan back to the people for the last time before producing the final version.

This will then go before the Town Council - which set them the original task in 2018 - for approval and adoption a little later this year.

During the first week of December the group successfully completed their round of face-to-face comment gathering on the plan outside the Town Hall.

Originally the public had until December 31 last year to have their say on Caru Llangollen.

But feedback was so enthusiastic that the group decided to extend the deadline for comments by another month, until January 31, so even more people can take part in the process.

To ensure as many people as possible could have their say SML asked town clerk Gareth Thomas to arrange for a mail drop of 1,450 specially- printed cards to every household in the town reminding people how to leave their feedback through written or emailed responses. This was at the town council’s expense.

But yesterday (Monday) he discovered that Royal Mail had failed to send out any of the cards.

He said: “I agreed with Royal Mail that the delivery would take place over the course of the two weeks commencing January 3, and I arranged for a courier to deliver the cards to the Royal Mail delivery centre in Warrington on December 23.

“I have a note signed by one of the centre’s staff, confirming they had been received.

“I learned yesterday that the cards have not been delivered and have now started the formal non-delivery complaints procedure.

“I will be claiming recompense from Royal Mail for the cost of the exercise, which includes £200 for the contract itself plus the £50 cost of printing the cards and the £80 cost of hiring the courier.”

Phil Robinson, who chairs Shape My Llangollen, said: “We are particularly angry because this is a major setback to the public consultation process and its is impractical to start the delivery exercise again as the cost of doing so, while waiting for recompense from Royal Mail, is beyond the resources of the town council.

“We have therefore decided we have no alternative but the extend the deadline for feedback again, this time until Monday February 14, and I urge as many people as possible to have their say on this extremely important exercise which looks at every aspect of our town’s future.”

A Royal Mail spokesperson said: “Our postmen and women work extremely hard to deliver mail to over 31 million addresses across the UK, six days a week, in all weathers. The vast majority of items are securely delivered to customers. We are sorry that this was not achieved on this occasion, and have been in touch with the customer about putting matters right.”

* To look through the plan online - and turn it over page by page - go to: https://pubhtml5.com/gaql/ahfd

* Send in your comments by emailing the Town Clerk at: townclerk@llangollentowncouncil.gov.uk by January 31.

* Hard copies of the plan are available in Llangollen library as well as online.