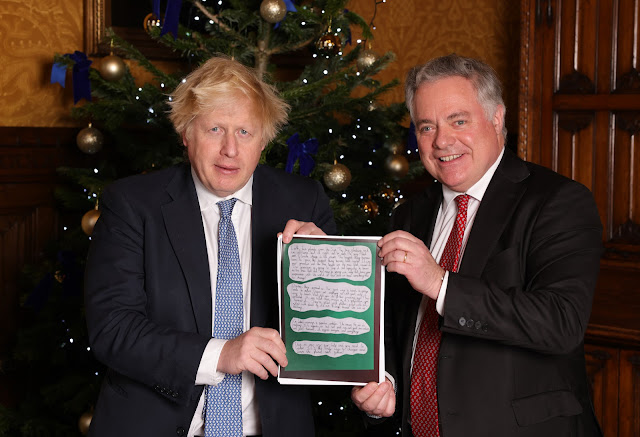 Mr Baynes was given the poems following a visit to the school during Great Big Green Week which ran from September 18 - 26, when he met students and teachers to learn more about their week of activities to encourage awareness and to listen to students’ climate change concerns.

The poems highlight a range of climate issues such as global warming, single-use plastics and deforestation, and were written as a call for action ahead of the United Nations Climate Change Conference – COP26 – last October and November.

Since Mr Baynes’ visit the school has been recognised with presentation of the highest Eco-Schools Award – the Platinum.

The school’s liaison officer Catrin, from Keep Wales Tidy, said: "Maintaining the Eco-Schools Platinum status is a fantastic achievement. The school, staff and pupils, should feel proud of their hard work and commitment."

Andy Wallis, PSE coordinator at Ysgol Dinas Brân, said: “I would like to thank all the staff and students involved in the Eco Schools programme, and in particular the Great Big Green Week, for the work they have done which has enabled us to win this award.

"Equally, I would like to thank both the headteacher Mark Hatch and our business manager Jamie Roberts for the investment they have made into making the school more sustainable and decreasing our carbon footprint with the instillation of the solar panels project.”

Simon Baynes said: “I was very pleased to present the Prime Minister with poems from the students at Ysgol Dinas Brân, by which he was very impressed.

"He remembers the school very well from his time as the Parliamentary Candidate for Clwyd South 25 years ago and is always very interested in hearing about activities locally, particularly in relation to the environment.

“The students and teachers have put in a huge amount of effort recently to raise awareness of environmental issue and reduce the school’s carbon footprint. And it was a pleasure to highlight their exceptional work to the Prime Minister.”