Chainbridge Hotel goes on the market for £1.8m 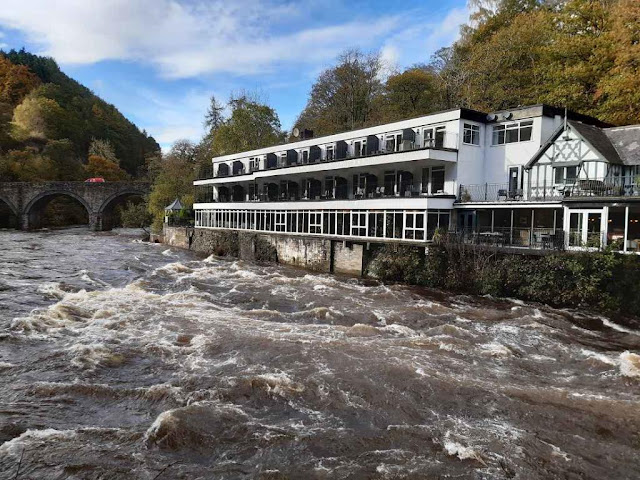 Llangollen’s world-famous Chainbridge Hotel (pictured) is up for sale with a price tag of £1.8m.

According to the property website Rightmove, it is on the market with Manchester-based specialist agents Fleurets.

The hotel was built in 1827 and became a popular venue due to its location adjacent to the iconic chain bridge over the River Dee.

There is also an outdoor seating area providing riverside views along the front elevation.

In October 2012 llanblogger reported how the hotel had recently been bought for £500,000 by Seamus O’Keeffe, then in his early twenties.

He had rescued it from administration where it had been placed following the collapse of Stephanie Booth’s Llangollen Hotels group of which it had been part.

Surrey-born Mr O’Keeffe told llanblogger it would be more of a family business than an investment opportunity as running hotels had been a family affair for him.

After reading history at Leeds University he went initially into public relations with a London agency before taking off in a completely different career direction to help run the George III hotel near Dolgellau with his wife Elizabeth for his parents-in-law.

When The Chainbridge came on the market he said he saw it as an opportunity too good to miss and the family moved up to Llangollen.

Mr O'Keeffe told the Daily Post: "We’re under no pressure to move on, and whenever we do it will be with a heavy heart.

"It’s a magical place but we think it’s the right time to give somebody else a crack of the whip!

"It’s an absolutely fantastic business, obviously an incredible, unique location, and we’ve had a lot of fun and success building up the hotel over the 10 years we’ve been here.

"We have some other interests we want to try and pursue so it seems the right time for a change.

* Details of the sale of the Chainbridge Hotel can be seen on Rightmove at: https://www.rightmove.co.uk/properties/118589033