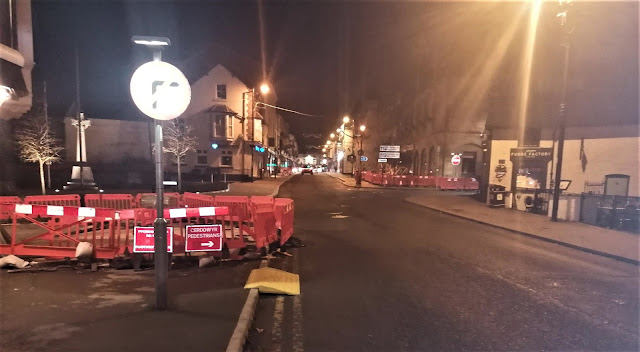 * A picture of the roadworks provided by the concerned parent.

A worried parent claims health and safety standards of the 2020 project roadworks in Llangollen town centre are "non-existent" making them "critically dangerous".

The parent, who wishes not to be named but has a child attending a local school, said: "Healthy and safety standards none existent.

"Schoolchildren, parents with prams, elderly, and the general public have to walk on busy main road to get past the pavement works.

"There are trip hazards (feet of traffic cones and barricade feet) on the road. A accident waiting to happen.

"Last year three people where injured as they tripped into the busy road due to inadequate pedestrian road safety barricades.

"How long will it be until our schoolchildren is hit by traffic due to the site staff and Denbighshire county council allowing this to stay unsafe and critically dangerous?

"The workforce is safe from harm as they are barricaded in and have hi-vis."

The parent added: "I have contacted the Denbighshire county council three times since Monday morning. They said they would contact the manager of the project to make it safe. Nothing has been done.

"There was a pedestrian walkway before the Christmas break but nothing has be put in place since work resumed on the 4th January."

A spokesperson for Denbighshire County Council said: “We will be installing today at the Church Street/ Castle Street area improved signage to inform the public about the closed footpath and to direct them to an alternative pedestrian route.

“Temporary tar ramps are to be installed at the suggested crossing points to cross the road to avoid the closed footpath.

“The walkway in place before Christmas is no longer possible to maintain due to the removal of the Traffic Management resulting in not enough room in the carriageway to safely route pedestrians.

“The alternative to this small pedestrian diversion would have been to install an additional set of traffic lights which would have caused additional delay for traffic”.

“Our site management team will continue to work closely with the contractor to monitor the temporary traffic management arrangements.”