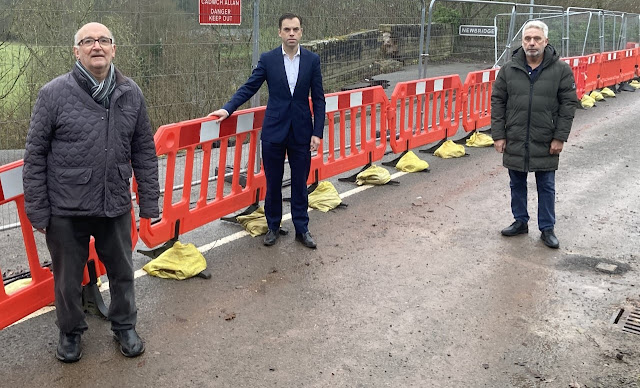 Member of the Senedd Ken Skates says he hopes work to repair a collapsed road between Cefn Mawr and Chirk will get under way soon as Wrexham Council prepares a bid for further financial support.

The Welsh Government has already awarded Wrexham Council £175,000 for ‘ground investigation and detailed design of remedial works’ for the B5605 at Newbridge, which suffered a landslip following severe storms last year.

The council is awaiting a final report, due in early February, and will then put together a business case for more major funding from the Welsh Government.

Mr Skates, the MS for Clwyd South, said he hopes to see ‘spades in the ground’ as soon as possible.

“Before Christmas I raised the issue of the closed road at Newbridge once again with the Welsh Government after the announcement of a £175,000 grant to help Wrexham Council carry out the initial work required,” he said.

“These investigations will shape the application the council will submit to the Welsh Government for further funding. I hope it’s successful and that we can see spades in the ground as soon as possible.”

Mr Skates said he had been in contact with Wrexham Council’s lead member for the environment, David Bithell, a number of times on the issue.

He added: “Sadly, there has been misinformation circulating about this issue over recent months and an element of mischief-making. However, I would like to thank Cllr Bithell for the way he has gone about trying to resolve this issue and sought to work with other elected members for the benefit of the communities we represent.

“I spoke to him on this issue again this week and we are both hopeful things will progress quickly once the council submits its funding bid.”

Cllr Wright said: “We’ve been continually bending Ken’s ear about this as local people are frustrated and they want to see action. Although this is a B-road, it is a vital link between our communities and some people have been without a bus service for nearly a year. It’s the council’s responsibility to carry out the repairs, but obviously for something on this scale they need help.

“All Ken can do is try to make sure the Welsh Government knows exactly how important this is for the people of our area. We have done all we can to get things moving on this.”

Cllr Hemmings said he had been in contact with both Welsh Water and BT, who have subsequently redirected sewers and fibre cables.

Cllr Hemmings added: “Funding for major projects like this isn’t just signed off – there is a process that has to be followed. I know people in Chirk are fed up of waiting for the work to be carried out, but the grant from the Welsh Government has really got the ball rolling.

“That has paid for the surveys to be carried out, and significant progress couldn’t have been made until that is done. It is important to know the cause of the landslip and how it should be repaired.

“Hopefully, the council will be able to get this application in soon and it will tick all the boxes, and then it will just be a matter of time before work get under way to reopen the road.”

Mr Skates added: “I think we are all frustrated that progress on this hasn’t been quicker, but all public bodies need to go through the same process when public money is being spent – it isn't given out for projects of this magnitude without due diligence being carried out.

“I look forward to Wrexham Council submitting a successful funding application as soon as possible, and I hope work can then get under way as a matter of urgency.”

A written response to Mr Skates from Lee Waters, Deputy Minister for Climate Change, said: “The Welsh Government has awarded funding of £175,000 for 2021-22 from the Resilient Roads Fund to Wrexham County Borough Council (WCBC) for ground investigation and detailed design of remedial works for the B5605 at Newbridge. These works will inform any future application by WCBC for funding for the construction of the remedial works.”