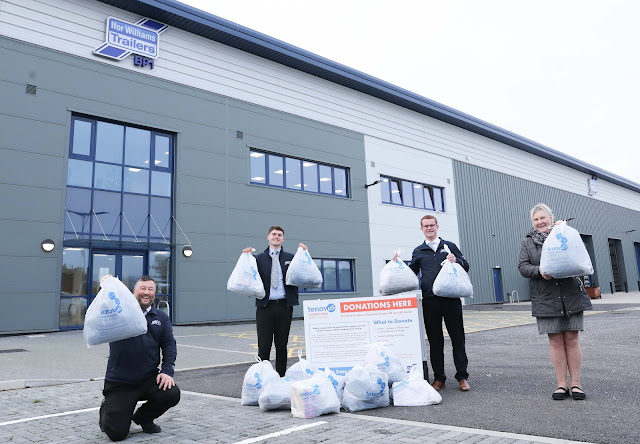 A cancer charity with a shop in Llangollen is hoping that a green revolution in fashion will help boost their finances after their fundraising efforts were badly hit by the pandemic.

According to Tenovus Cancer Care, which has shops across north Wales, more and more people were ditching fast fashion and buying pre-loved clothes.

As a result, the new generation of bargain hunters are snapping up designer outfits for rock bottom prices.

Carole DeRosa, a retail manager at Tenovus, was speaking during a visit to Ifor Williams Trailers which have established collection points for the charity at each of their six sites in Denbighshire and Flintshire.

Big-hearted staff at the trailer firm are donating their unwanted items so that they can be sold by Tenovus in their shops.

The organisation was established by 10 Cardiff businessmen in 1943 – hence the name, Tenovus (Ten of Us).

It is now one of the leading cancer charities in Wales, helping patients with care, treatment, support and research.

The charity also has three mobile support units so that people don’t have to deal with the stress and costs of travelling miles to hospital.

Carole DeRosa said: “Tenovus is here from the moment of diagnosis and through people’s cancer treatment. We understand what it is to live with cancer and how it affects families and friends too.

“We’re here with information, advice, practical and emotional support. We’re here for you.

“We’re on the end of the phone and we have counsellors and financial advisors who can take that burden away from you.

“We’re here 365 days on the end of a phone to support people and answer questions about treatment, its effects and the things that matter to you.

Carole added: “The retail side of things contributes significantly to ensuring that our services can be here for everyone affected by cancer.

“The shops are also part of the community and lots of people use them to buy what they need.

“The past couple of years have been a struggle in terms of fund-raising because we haven’t had the donations we would usually receive.

“During the pandemic people were more likely to be diagnosed at a later stage and consequently our services have been in even greater demand.

“When I got in touch with Ifor Williams Trailers they immediately said they would be able to give us a hand which was just a relief.

“The other benefit is the green aspect of recycling clothes, re-using clothes rather than them going to landfill.

“You’ll often see four or five students shopping together and they can buy a designer outfit for the price of a garment from Primark which is nice to see.”

He said: “Unfortunately, cancer touches so many families and everyone here has been doing their bit.”

Joe Pardoe, a member of the distributor management team, added: “It’s always good to give to charity and Tenovus is a particularly good cause. They do fantastic work so it’s great to be able to support them in this way.”

It was a sentiment endorsed by the Group Head of Sales  Rob Small who said: “Ifor Williams Trailers is very much a community based company and we are proud to be able to support Tenovus in this way.

“The practical support and succour they provide in people’s hour of need is invaluable while the research they have helped to fund has already saved countless lives.

“It’s also great to hear that more and more people are now adopting a green approach to shopping, with sustainability taking precedence over fast fashion. That’s something that benefits all of us.”