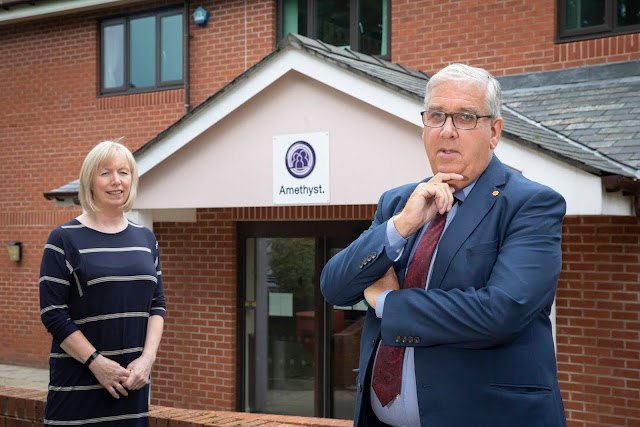 * With the North Wales Police and Crime Commissioner Arfon Jones is Sarah Staveley, who manages SARC (Sexual Assault Referral Centre) which has received a grant through the PCC to employ a new Independent Sexual Assault Advisor to help cope with the Covid Crisis.

A police boss is warning people to be on their guard amid fears of a surge in sex attacks as the coronavirus restrictions are eased.

The region’s Police and Crime Commissioner, Arfon Jones, revealed the number of reported cases had dropped during lockdown as a result of people having to stay at home.

But Mr Jones fears the number of assaults will start to rise as the night time economy opens up once more.

The commissioner is also concerned that victims are suffering more mental health problems as a result of being isolated and courts falling behind in dealing with cases.

He has been successful in gaining almost £77,000 from the Ministry of Justice’s Rape Support Fund to fund a full-time Independent Sexual Violence Advisor (ISVA) for the next two years.

The post will be based at the Amethyst Sexual Assault Referral Centre (SARC) in Old Colwyn and will support victims from the six counties across North Wales.

It will enable the centre  to work on clearing existing caseloads which have increased due to demands with courts closing and a number of clients suffering severe mental health issues due to the impact of the Covid-19 pandemic.

The centre receives between 500 and 550 referrals a years with the victims ranging in age from one to pensioners in their 70s.

SARC manager Sarah Staveley said: “The length of time lockdown has gone on has had a detrimental effect on the mental health of some of our service users.

“These are people that already had mental health issues as a direct result of their traumatic experiences.

“The delay in getting investigations underway and court cases through the criminal justice system has just made matters worse.

"We have also had the problem of not being able to conduct face to face interviews or hold meetings with clients. We have maintained a telephone service and have always been there if needed but it isn't the same and adds to the stress experienced by victims.

"It is highly likely we will see a rise in referrals as lockdown measures are eased. There will be more opportunities for people to meet and as a result for sexual assaults to occur.

“We are also likely to see a rise in referrals once people are able to seek help and advice.

“The £76,824 grant secured by the Police and Crime Commissioner will allow us to appoint an ISVA who will have a big role to play in supporting victims of rape and sexual violence and their families.

“The role will mean the ISVA will see a case through the criminal justice system from beginning to end. Some victims need more support than others but it’s important that we are there for every victim that needs support.

“It’s wonderful that Mr Jones recognises the need for our service. He and his office have always given SARC a great deal of support and help.

“It’s clear Mr Jones really understands the needs of victims and the positive impact our services can have on the well-being of those affected by rape and serious sexual assault.”

Tackling sexual violence and providing support for victims is a key priority in the commissioner’s Police and Crime Plan which provides the blueprint followed by North Wales Police.

Mr Jones said: “I am acutely aware of the backlog of cases being investigated or going through the criminal justice system and understand the impact delays due to the Coronavirus pandemic could have on victims.

“The work that takes place at SARC is absolutely vital and should never been underestimated. It’s so important that a victim of rape or serious sexual assault has somewhere to go knowing they will be taken seriously and get the help and advice they need.

“Covid-19 and lockdown has been a very difficult time for everyone but for someone that is waiting for a case to go to court or who has had a court case postponed due to the pandemic it can have a devastating impact and they need further support.

“This additional money from the Rape Support Fund will help us ensure that North Wales victims of rape and sexual assault get the help and support they need and that really is vital.

“While the number of referrals has dropped in recent months, I am concerned there will be an increase in the number of offences as the restrictions are eased and I would urge victims to seek help.

Sarah Staveley added: “Victims are able to seek the advice and the support they need whether the crime took place recently or in the past. We will, if the victim chooses, support them in making a formal complaint to the police.

“We have an amazing facility where we can undertake forensic medical examinations as well as follow up health checks. We also have video interview and counselling rooms and a live link to the courts so victims can give their evidence to the courts from the SARC.

“Victims are often traumatised when they come here so it’s our role to help them understand their choices. We will support them and empower them in making decisions and how to move on from their experiences.”

* Anyone who has any concerns over sexual abuse or child sexual exploitation  should call North Wales Police on 101. The North Wales Sexual Assault Referral Centre can be contacted by calling  0808 156 3658 or emailing: BCU.Amethyst@wales.nhs.uk and for further information visit the website at www.amethystnorthwales.org.uk
Posted by llanblogger at 6:34 AM