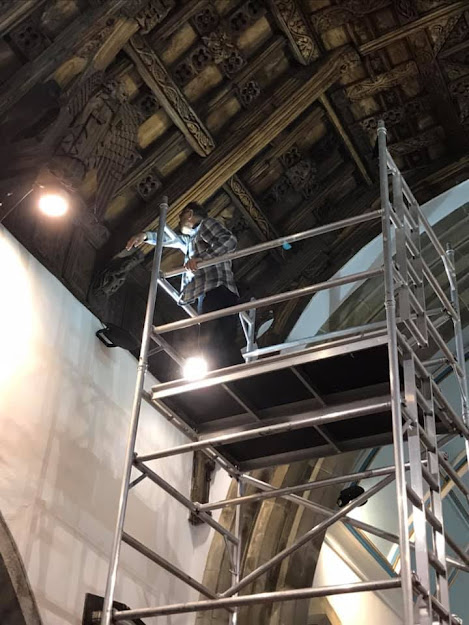 * One of the experts examines the ancient roof

A team of experts has been drafted in to help investigate the historic roof at St Collen’s Church in Llangollen.

Vicar, Father Lee Taylor has put together a task force to lead a new project to reorder the building to make it a more adaptable space for the community and also more engaging and accessible for visitors.

The most striking part of the building is the 15th century carved oak hammer beam roof which is thought to have links with the monks at Valle Crucis Abbey.

Father Lee said: “A previous St Collen’s guide book boasts that this is what we got in Wales while Michelangelo was working in Rome. It is believed to be the finest example of medieval Welsh craftsmanship.

“We want to get a more accurate dating of the roof and interpretation of all the carved figures on it. We are also planning to install a new lighting scheme that would highlight and enhance all the carved images on the roof.”

He added: “I have been in touch with the Royal Commission on the ancient and historic Monuments of Wales and am delighted that they want to work with us.

“One of their senior investigators, Richard Suggett, an expert in architectural history, and his colleague chief executive Christopher Catling, visited St Collen’s recently to assess the roof as to its suitability for tree-ring dating which may provide an exact date for the roof.

“The result of this would be a visitors interpretation board placed at the back of church.

“One fascinating story depicted on the roof is of the man who drank too much ale.

“Often, medieval woodcarvers would embrace the humour of the secular world by portraying stories that would be cyclical.

“In this particular three-part story, the man is shown firstly rolling beer barrels, secondly drinking the contents from one of the barrels and, thirdly, fully immersing himself in the barrel so not to let any go to waste.”