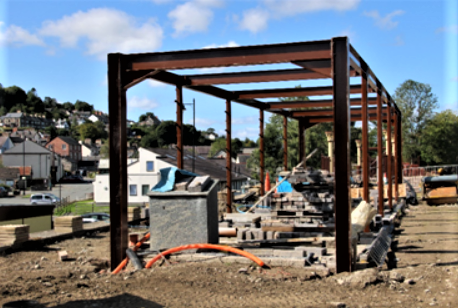 * A platform level-view of the new steel structure at Corwen.
Picture by George Jones.

The fabricated steelwork for the on-platform waiting room at the new Corwen station has now been put in place.

Designed by EWP Structural Engineers of Bangor on the recommendation of Denbighshire County Council, the steel beams were fabricated by Barnett Engineering Ltd of Rhosllanerchrugog and delivered to site for assembly by their team.

With help from the project’s Road Rail Vehicle, the beams where hosted into position to form an oblong box within the area of the waiting room measuring 15 x 4 metres with provision for services to toilets already plumbed in.

The steelwork comprises four Ibeams for each corner with eight intermediate wind posts and associated cross beams to link the vertical members, all weighing in at around four tons.

The design called for integral strength to support the roof which will be part of the station canopy and subject to high winds at this exposed, elevated position on the embankment.

The steelwork sits between the three pairs of ex-Blackfriars, London canopy columns surrounding the access stairwell and the final pair of columns at the eastern end. The casual observer now has some idea as to how it will all link together to provide for the canopy.

The eventual canopy will require the fabrication of six assorted ‘A’ frames to support the roofing material and have been specially designed to cater for the variations in the width of the platform and curvature. However, construction of these is for a later stage of the project.

With the steelwork in-situ, the preparation of the surrounding area can be completed and a good start has been made by contractors Wrexham Paving on the laying of the tactile edging and paving blocks at the eastern end of the platform.

Project Leader, Richard Dixon-Gough said: “I would like to thank Barnett Engineering for their work to help us complete this project. They have done a great job in fabricating and erecting the steelwork for the waiting room building on the Corwen new build station platform.

“It is a little unfortunate that the results of their skills will be hidden within the structure of the building when the brickwork etc. has been completed, but at least we can enjoy the visual impact in the short term.

“Our association Barnett Engineering has been very successful, and this is the latest example of their skills and expertise as applied to the project; others include the new build water tank and the modifications required on the canopy columns, all of which are admired by the passing public and we have received many positives unsolicited comments about their presence on site.

“The steelwork is a further example of how the overall project is now coming together after many years of planning and hard work by a small band of volunteers on site.

“Once completed and passed fit for purpose the new build station and infrastructure will be opened to the public and will increase footfall within Corwen helping to boost the local economy.”