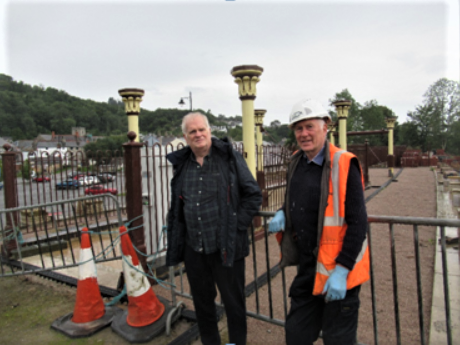 * Robin Jones is shown progress on the station project by Richard Dixon-Gough.

Robin Jones, editor of the monthly Heritage Railway magazine, called in at the Corwen station site to catch up with the progress on work to create a new terminus station.

In the course of a conducted tour of the site, he inspected work on the platform with the recently installed heritage canopy columns, as well as the completed trackwork.

The water tank and signalbox were also features new to him since his previous visit.

He expressed himself very pleased with the work undertaken so far, describing the station as ‘magnificent’ and the renovation of the former London Blackfriars station columns an impressive addition to the platform.

Robin Jones said: “Whilst other railways might have made do with a wooden platform at the end of the line, at Corwen a proper station facility has been created by project members.

“I think the Corwen station is a miraculous achievement and a phenomenal construction in the middle of nowhere.The volunteer effort which has created the station has been against the odds in terms of physical constraints, the labour needs and the ever-present fund-raising requirement.”

Thanking Robin Jones for his visit, project leader Richard Dixon-Gough said: “We still have some way to go yet before the station is ready and able to receive passengers, therefore all kinds of support are still required prior to opening this new build terminus station to the fare paying public.”