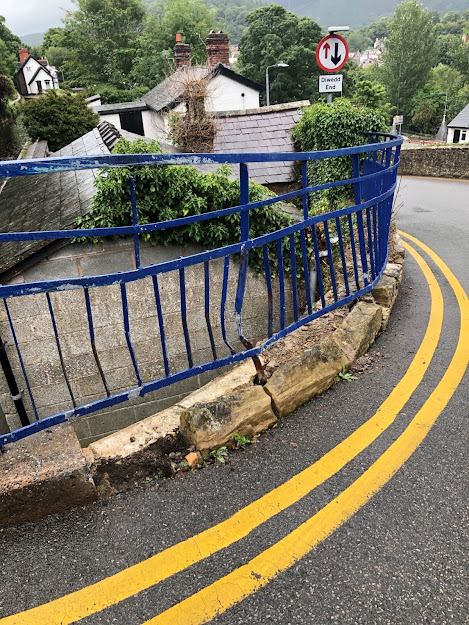 A council chief has been questioned about the safety of broken railings on the canal bridge near to Llangollen wharf.

Supplying pictures of the damage, she added: “This damage occurred at least three years ago. It begs the question as to why this hasn’t been fixed and I would like to know what DCC intend to do about it.

“To be honest, we’re all getting pretty fed up with the lackadaisical approach being taken by DCC in this town and it’s high time DCC officers stepped up to the mark and stopped taking this town for granted as a ‘cash cow’ for DCC coffers.”

Ms Greenhalgh responded: “As this relates to the parapet railing of the bridge I can confirm that the area was inspected by the Senior Engineer in the Structures team and he is of the view that the fence is still fit for purpose and is therefore a low priority in terms of repairs.

“Unfortunately the railing does get caught quite regularly by buses travelling up to the school but to rectify the alignment so that damage won’t occur is unfeasible.

“We do monitor the situation carefully and should any further damage occur then the position will of course be re-assessed.”

Ms Edwards wrote back to the chief executive saying she was “perplexed” by the response.

She told Ms Greenhalgh: “School buses do not use this route. The children attending Dinas Bran school walk to the Pavillion car park where the coaches are parked . I’m somewhat surprised you don’t seem to be aware of that.

“Coaches do however take tourists up Wharf Hill to Llangollen Wharf where visitors enjoy the canal boat trips.

“ Whilst I’m not a structural engineer, the photographs I provided clearly show that the metal railings are no longer securely fixed to the stone parapet base. When was this last inspected?

“Surely you are placing your council at risk of a negligence claim for failure to protect the safety of users of a public highway, both pedestrians, including the plethora of visitors and residents  that regularly walk that way to access the public footpath that leads up to Castell Dinas Bran, not to mention the school children and drivers of vehicles .

“The pedestrian access to the canal is also below that bridge, so what happens if a vehicle goes through those damaged unsecured railings and crashes onto the path below?

“Regardless of the safety aspects, which are paramount, the damaged railings look an absolute mess rather like the ones on the A539 also reported recently and damaged months ago.

“Bearing in mind that Llangollen is an important inland tourist destination set in the picturesque landscape of the World Heritage Site and AONB , this needs urgent attention  to deal with their damaged appearance.”