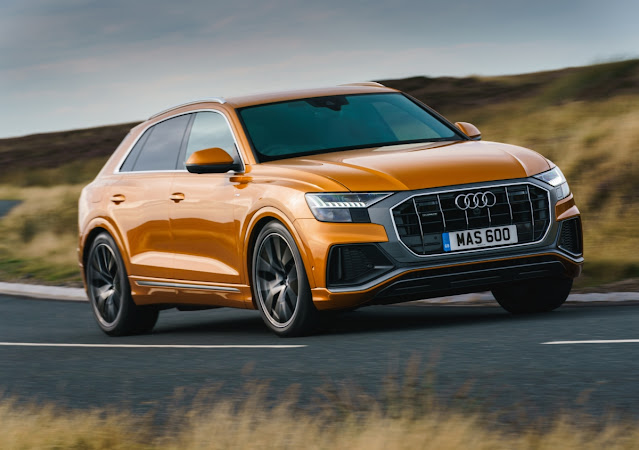 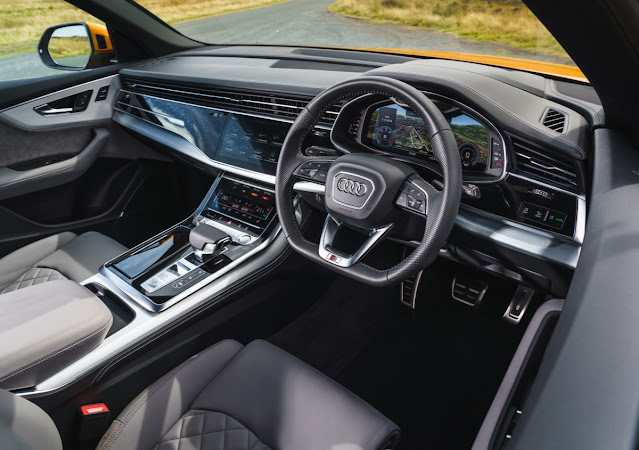 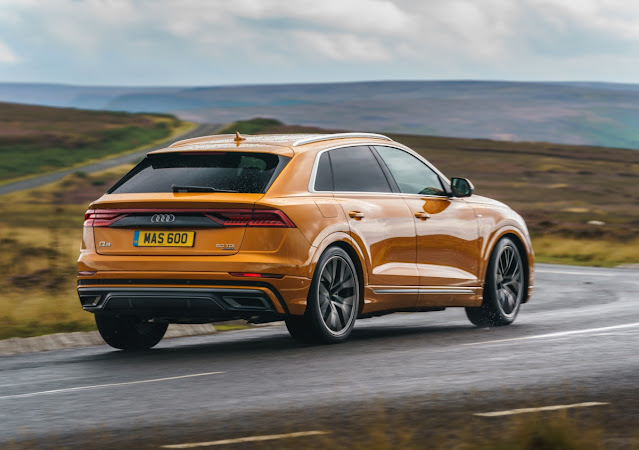 Audi had one thing in mind for the Q8: Make it the best premium SUV money can buy.
And the flagship of the Q family makes quite a statement with design lines a little more adventurous than we are used to.
Compared to not so pretty Q7 the Q8, with its restyled in your face grille, frameless doors and sloping coupe roofline, is really quite attractive.
Flagship or not the Q8 is 66mm shorter than Q7 although there is no shortage of space inside. With the split rear seat backs folded two could happily bed down for the night while there is oodles of room for long legged passengers in very comfortable seats.
That dipping roofline rules out a third row but the job of hauling seven people is the province of Q7.
Make no mistake a lot of thought has gone into this car and that becomes evident once inside.
It is a bit like taking your seats in a top class theatre and waiting for the curtain to rise on a star studded show. In this case the main event is the virtual cockpit, a full width screen in the driver's binnacle and two central screens, 10.2in up top for the car's main functions, navigation, telephone, Bluetooth and stuff you are never likely to use, with the lower 8.6in screen for the everyday functions of heating, radio and the like.
It looks like touchscreen but requires a gentle press on the function which gives a satisfying tick to let you know the job has been done. Trust me, this is clever stuff.
Not only is it the most technologically advanced set up I have come across it looks fantastic and although intimidating takes little time to work out. The star turn has to be the ability to use a finger to write the navigation address on to the face of the lower screen. That is so cool.
I did not try inputting Llanfair PG full out but most of the time the town, street, postcode is predicted and can be selected from a list to complete the operation. Voice control was not so effective but can work if you have the patience.
For the first time I have had an Audi not loaded with 10 grands worth of extras and that's because the top Vorsprung model gives you just about everything in one package so sit back and enjoy the luxury of fine leather, exquisite trim and finish and such niceties as air conditioned front seats, powered steering wheel adjustment and gobsmackingly clever Matrix LED lights that dance around like a ballet company.
There is much more along with a list of safety features as long as your arm.
Air suspension is a given on cars at this level and the Audi is again bang on the money. There are several settings but just go for comfort and feel how the Q8 can stifle the jarring affect of potholes, poor surfaces and even speed humps.
I used Q8 to tow my caravan - I can think of cheaper and equally capable tow cars - but my goodness did it do the job. The combination of the air suspension and torque from the 3-litre turbo diesel make this a mighty towcar - it could pull two of my vans, and the slick eight speed auto box is a stress free match. It was also surprisingly fuel efficient returning 27mpg over 160 miles with my wife behind the wheel and 24mpg with me. No sarcy comments please.
Some of this fuel efficiency will be down to the 48 volt mild hybrid technology which allows the engine to coast without any throttle. Driving solo the Q8 hit 40mpg which is seriously good for a car of its size and weight.
I've been banging the petrol drum with the last few cars I have tested but from what I have just experienced my recommendation would be diesel because of the engine's refinement, performance and economy.
So is Q8 now the best premium SUV on the market? In some ways it is. It is a technological tour de force and ahead of everyone, and I have always said no one can trim a car like Audi excepting the super luxury motors of course. It does not handle as sharply as a Porsche Cayenne, but does that matter when the majority of its life will be cruising in the fast lane?
Can it topple Range Rover Velar from the top of the pile? Well for me the Velar still looks the part but that's about all. Such difficult choices!
Need to know
Q8 50 Vorsprung quattro
£84,375
3-litre TDI; 286bhp
0-62mph 6.3secs; 152mph
32.8mpg combined
228g/km. 1st yr tax £2175 then £145
Boot 605 to 1755 litres
Posted by llanblogger at 7:07 AM