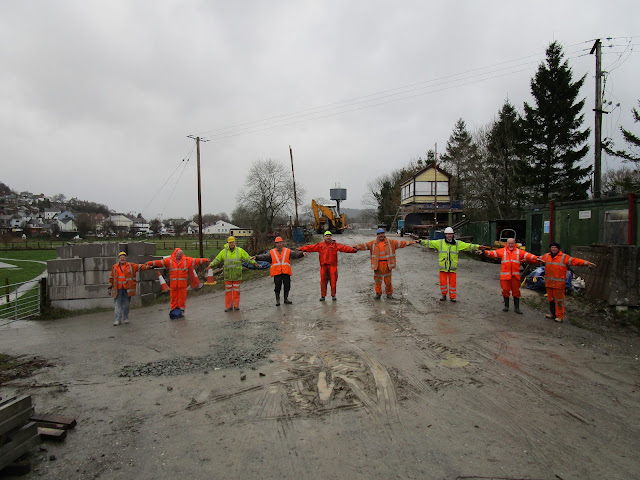 * Railway volunteers line up to illustrate the width of the Gap, which is about 22 yards and of varying depth.
Llangollen Railway Trust’s Corwen Central Railway Development project is running an appeal to fund the reinstatement of the Gap in the railway embankment outside Corwen.
With work nearing conclusion of the island platform and loop line build, the focus turns to the infamous Gap in the embankment, long seen as the big obstruction on the track bed.
Originally bulldozed through to provide alternative access to the sewage farm, the gap was further eroded in 2013 by contractors for the Corwen Flood Relief Scheme and has since provided the essential access for the road delivery of materials for the project.
Recently it offered the only route for the water tank and signal box cabin to be brought in for installation on site.
Early this year the project team will be looking for a contractor to deliver and compact the spoil to reinstate the embankment for the connection of the two railheads and the laying of a parallel extended siding.
With a length of 150 yards, the cubic capacity of the gap will require some 9,000 tonnes of spoil to be brought in at an estimated cost of £10,000.
Help with financing this final challenge in completing the Corwen terminus is again sought from supporters following the success of the appeal which has financed the platform infill.
A Llangollen Railway spokesperson said: "The difference in time is shorter and the reward for supporters will be the sight of the train arriving at the new station across the final frontier, something we are all waiting for.
"With help from all sources, we will bridge the Gap and donations to support this appeal will be welcomed by the treasurer for the Corwen Central Railway Development project: Mr Paul Bailey, ‘Dolwen’, Bryn Eglwys, Corwen LL21 9LY.
An appeal leaflet will be published on the Llangollen Railway’s website Corwen News pages this month.
Posted by llanblogger at 6:53 AM