It’s crunch time for crisp packets in Llangollen thanks to the woman who has already led a successful crackdown on plastic straws and water bottles. 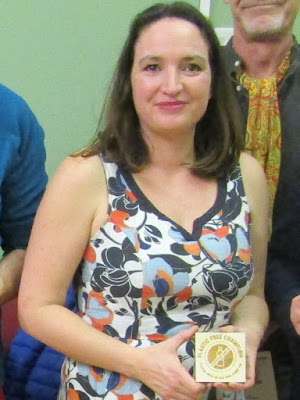 Fresh from her success with these two plastic-reduction campaigns which led to the town becoming the first in Wales to win coveted plastic-free status Mair Davies (pictured right) is now spearheading a new drive to clear local streets of the dreaded crisp bags.

If not correctly disposed of this highly common piece of plastic garbage can eventually cause major ecological damage.
She has already signed up her first crisp packet collection point, at Llangollen RAFA Club, and is now looking for more places willing to lend a hand in harvesting them in ready to be sold off in bulk for proper disposal and a small cash return which will be put towards the work of Llangollen Friends of the Earth (FoE).
It was through her membership of FoE that last spring Mair launched her smash-hit straw battle, aiming to have local catering businesses swap plastic for enviro-friendly paper versions.
Twenty-three Llan outlets, including pubs, restaurants and cafes, were persuaded it was a good idea and came aboard.
After straws Mair turned her attention to plastic water bottles with the goal of persuading  businesses in the area to offer free water refills of reusable bottles. This time 18 outlets flooded to her support.
Late last year the effectiveness of her campaigning led to Llangollen landing its prestigious plastic-free accolade from the respected Surfers Against Sewage eco organisation.
Another success came when Mair was awarded a £3,500 grant from the Welsh Government which is enabling her to run sessions across Denbighshire on how to effectively use the composting bins that many people now have in their gardens.
It’s now time for her to target those crisp packets and Mair explains that the kind of plastic they are made from isn’t generally popular with recycling firms as it costs more to process than they can sell it on for.
But she’s now found a company, Terracycle, a worldwide-based outfit whose UK arm specialises in handling hard-to-recycle plastic products such as cigarette butts, contact lenses,  toothbrushes – and crisp packets.

The return she’ll get on packets collected up is pretty meagre – about £2 for 2kgs or four binbags full – but all profits from the operation will be handed over to FoE in Llangollen.
Mair said: “I decided to turn my attention to crisp packets as there are so many of them about and, if not properly disposed of, they can cause major ecological problems.
“There was one story recently of a dead whale being cut open and a 30-year-old crisp packet being found in its stomach.
“The more I read about this the more depressed I became and that’s why I feel I have to do something about it.”
Town councillor Sheena Grindley at Llangollen RAFA Club, who like Mair is a member of the town’s Cittaslow Committee which aims improve the quality of local life, was the first to sign up to the crisp packet collection crusade.
And Mair says she’s now looking for other places in the town to get involved. Anyone interested can contact her by email at: cerimair@gmail.com, or by phone on 07969 891683.
Her next green project, still in its early stages, is the production of “ecobricks”.
She’s just led her first workshop, at Pengwern Community Centre in Llangollen, showing people how to stuff plastic bottles with small pieces of waste plastic which can then be turned into building materials, furniture or perhaps artwork.
Posted by llanblogger at 6:59 AM