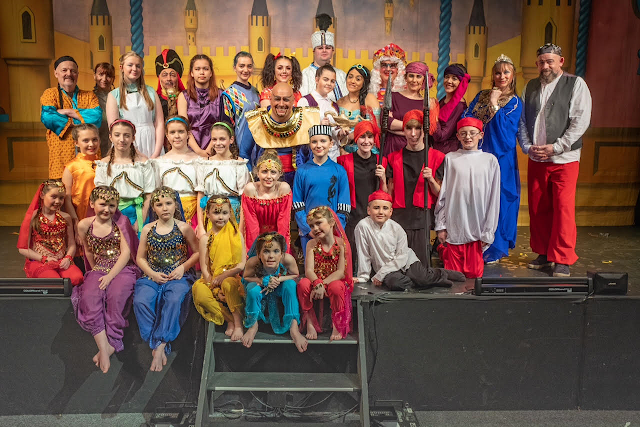 * The cast of Aladdin at the Pavilion. Picture by Barrie Potter.


Llangollen Pantomime Group’s latest production has the lot – dazzling costumes and settings, great acting and singing, plenty of laughs and even a fly-past by the Red Arrows.
Just why and how the famous RAF display team makes an appearance I won’t divulge for fear of spoiling things for those yet to see Aladdin at the Pavilion.
But even without them, the rest of the enormous and talented cast are flying high.
And that’s especially notable as a high percentage of them are panto debutantes.
Taking the title role is Sophie Preston as the lad who soars from humble beginnings working in his mum Widow Twankey’s laundry to marry the beautiful princess.
Despite there being loads for her to do across the two acts Sophie shines in both acting and singing departments.
Another key role held down by a promising first-timer is Aladdin’s love interest Princess Jasmine. Riah Andrews takes flight in the part and can really belt out those songs.
At various points you’re left wondering if Peter Kay has nipped over to Llangollen to sneak inside the outrageous costumes of Widow Twankey.
But no, it’s actually David Lyne infusing the dame with a similar Lancashire accent and world-weary comedic touch which can’t fail to have the audience in tucks.
Another crowd pleaser par excellence is Llan panto regular Neil Barrett who makes a brilliantly snarling and nasty Abanazer, the villain who plots to do down Aladdin and his family at every turn attracting the required amount of hisses and boos along the way.
Daniel May brings his stature marvellously to bear as the Sultan, again with a rather good Lancashire accent and understated line-delivery. It’s his first panto outing but, judging by this performance, it won’t be his last.
Llan stalwart Simon Orton-Jones, who also produces and directs the show,  has shown true dedication by apparently having his head shaved for the part of the Genie of the Lamp. But his tonsorial torture is worth every lost hair because the audience loves him every time he makes his entrance amidst an enormous cloud of smoke.
Once again it’s a family affair for the Orton-Joneses as Simon’s wife Tessa appears as Doner, one half of the mandatory comedy duo with Louise Lyne as Shish - both doing very passable scouse accents – and daughter Celyn is a winsome Soapy Sadie.
There are also some outstanding youngsters, especially Beatrice Lermite as the Genie of the Ring and Marybeth Hughes as Wishee Washee.
They’re backed up well by the experienced Karen Campbell as the Sultana, Mark Roberts as the wonderfully animated Officer Tai Chi and Justine Bradey as the narrator Scheherazade.
The costumes are truly eye-popping and the settings superb, not least the movie backdrops which illuminate quite a few scenes.
Also taking things up a notch are the six-piece live band headed once again by Helen Belton.
If you can’t wait to find out what the Red Arrows have to do with it all there are a couple more evening performances until Saturday and matinees on Saturday and Sunday. But I'd hurry as last night's opening show was almost a sell-out.

* Tickets are available online atwww.ticketsource.co.uk/llangollenpantoor in person from Gwyn Davies Butchers, Jade Hair & Beauty or by calling 01978 860297.
Posted by llanblogger at 7:21 AM