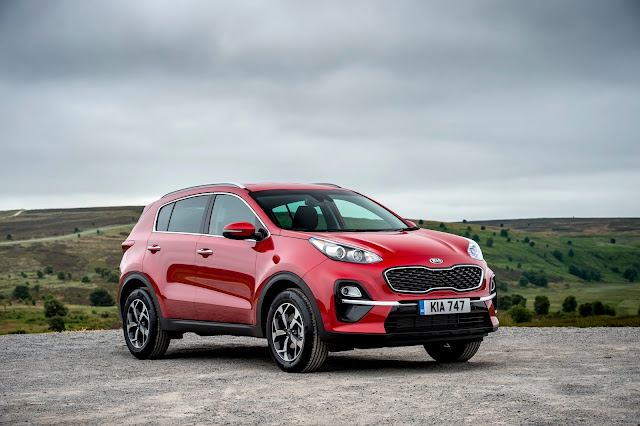 * The Kia Sportage is a global success story.

HEADLIGHTS are brighter than ever but are they getting too strong?

The latest LED bulbs have tremendous power but if you are on the receiving end some car headlights are overpowering.

The headlights on the Kia Sportage might fall into this category because I was flashed by a few cars who, presumably, thought I had not dipped.

Sportage was always on dipped beam when necessary because my top of the range GT Line S has auto dipping headlights which opened up another headlights debate.

I am a huge fan of automatic dipping but it can cause problems on rural roads with lots of bends and short straights. The majority of drivers dip as soon as they pick up the headlight beam before the oncoming car comes into view, but auto dipping reacts when lights meet and that can be uncomfortable for the approaching driver so I elected to revert to manual dipping until back on the more open A roads.

What of Sportage? It has been around for 25 years but the big story started in 2010 with the new style crossover model. Since then it has enjoyed phenomenal global success with one sold every 69 seconds. It has been Kia's best seller in the UK for ages racking up 36,000 this year and is expected to hold top spot through 2019.

Now Kia has added a new dimension with a 48 volt mild hybrid mated to a 182bhp 2-litre turbo diesel. An electric motor powered by a lithium ion battery adds a little more horse power to give an extra nudge during acceleration as well as reducing exhaust emissions. What is noticeable is the extra torque, 400Nm against 320Nm for the 136bhp 1.6 diesel making this quite a swift motor.

The hybrid also gets a new eight speed automatic which is exceptionally smooth as is the hybrid boost, so smooth I couldn't even detect it. In fact the only clue to its existence is the battery box behind the back seat which obviously eats into boot space, but it's a relatively small bite.

The GT Line models are here to cover all bases because some rivals like Seat Ateca give a sportier drive. The firmer suspension of my all wheel drive GT Line S was obvious before selecting sport mode and it does the job well, plenty of grip and good feel from the steering, yet there is still a pleasing level of comfort.

Unlike the high tech Peugeot 3008, Sportage takes the middle ground with an 8in touch screen covering a number of functions but all the heating controls are clearly strung across the centre console making selections fuss free from finger sized switches. I particularly liked the one key stroke which brings the heating settings to the big screen.

The quality of the trim and fittings suggest Kia is upping its game with Sportage and nothing much has been left off the spec list for the S model which picks up panoramic sunroof, powered front seats and tailgate, heated front and outer rear seats, ventilated front seats to keep bodies cool in the summer sun, heated steering wheel, 8in touchscreen (7in for lower models), navigation, a 360-degree camera with brilliant definition along with a full suite of safety aids including adaptive cruise control, forward collision avoidance which can pick out pedestrians and blind spot collision warning.

As you would expect this level of kit does not come cheap so how does £34k grab you? It is a lot of money but you get a lot of car, backed up by Kia's famous seven year warranty. Whether the extra horse power is worth an extra £3,500 compared to the new 1.6 litre diesel with nearly 10mpg more is debatable but history shows buyers want top spec cars so it is down to how much people want to spend.

I topped 800 miles in a week averaging 39-41mpg which is nothing special although I did top 50mpg on a 40 mile dual carriageway trip so economy is there with careful driving.