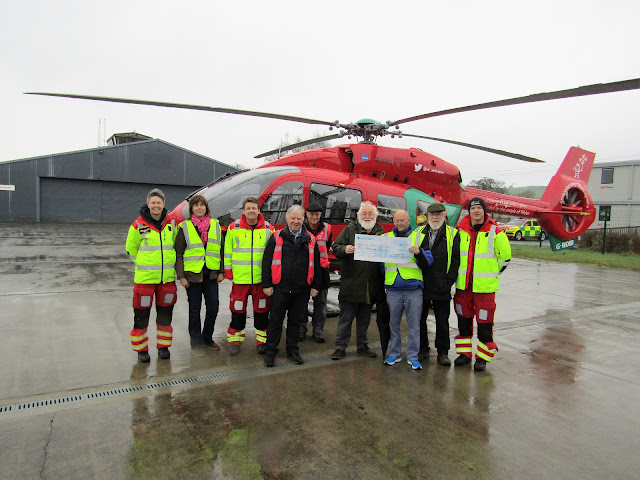 Members of the committee behind the annual Llangollen Christmas Festival have handed over almost £2,000 in donations to the Wales Air Ambulance.


They went along to the ambulance base at Mid Wales Airport in Welshpool to meet paramedics, doctors and pilots manning the lifesaving helicopter which flies from there on missions across the country.
And they presented them with two cheques – one for £1,000 which was the proceeds of last year’s festival at the end of November and the other for £950, the cash collected by festival committee chair and Llangollen town councillor Austin Cheminais on his appearances with Santa during the festival season.


The group was then given a closer look at the banks of hi-tech medical equipment packed in the helicopter’s fuselage.
Wales Air Ambulance covers the whole of Wales every single day.
Each year its fleet of helicopters attend around 2,500 missions, covering countryside, towns and cities. This includes miles of Welsh coastline and mountain ranges.
Wales Air Ambulance prides itself that it can be there for anyone in Wales within 20 minutes and brings a mobile A&E direct to patients.
Its team of critical care consultants and practitioners has some of the most pioneering equipment and skills in the world, including blood products and techniques developed in the armed forces. This means that patients receive advanced care before they even reach hospital.
The air ambulance is funded by the people of Wales and relies entirely on the public’s support to help keep the helicopters flying.
The charity does not receive direct funding from the government and does not qualify for National Lottery funding.
It therefore needs to raise £6.5 million every year to operate the service, with each mission costing an average of £2,500.
Cllr Cheminais has raised many hundreds of pounds for the air ambulance over the past few years as a way of saying thank you for the way the Midlands helicopter zoomed in to airlift him to hospital back in 2010 after he was run over twice by a delivery van in the car park of the school in Walsall where he was then headmaster.
He said: “All our air ambulances do a fantastic job of and I am delighted that, once again, we have been able to support the charity with money raised at the Llangollen Christmas Festival.
“It was also very interesting for our committee members to get a first-hand look at the Wales Air Ambulance and chat to crew members about their vital role during our visit to Welshpool.” 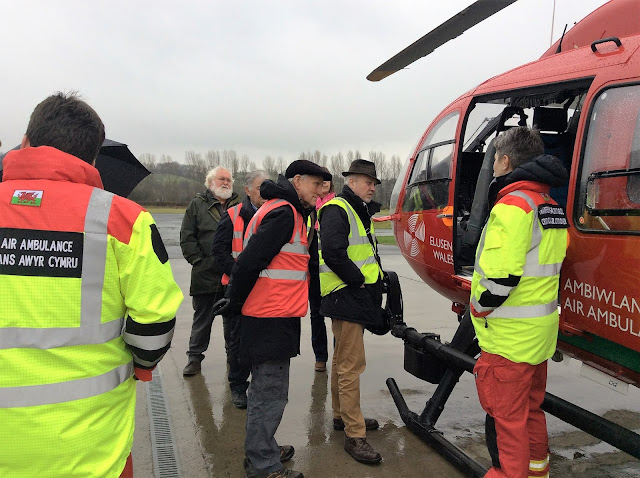 * Team members are briefed on the working of the air ambulance.