Are you prepared for a spell in custody? 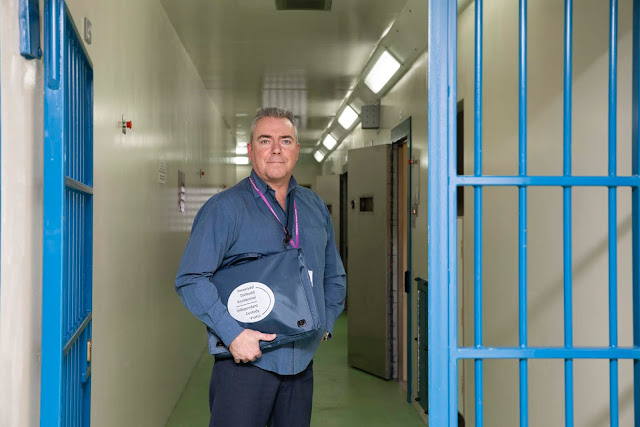 Members of the public who are prepared for a stretch in police cells are being sought – but not as prisoners.

More volunteer independent custody visitors are needed to check on the welfare of detainees to ensure they are being treated correctly and in line with regulations.

According to Mr Jones, a former police inspector, it’s an important public service role and volunteer independent custody visitors are another set of eyes and ears ensuring the police get it right when dealing with people under arrest.

He said: “Custody visitors have access to custody suite cells and are able to talk to detainees providing the detainee is willing to talk to them and is happy to do so.

“The role of the custody visitor is quite simple, they are there to provide public reassurance that detainees are treated fairly. They need to check on the welfare of the detainee, that they have received and understood their rights whilst in custody and on the facilities in the custody suite.

“We need to ensure North Wales Police is absolutely above reproach when it comes to dealing with arrested persons whether that person is male or female, a young person or an adult.

“There are, quite rightly very strict regulations that govern how the police deal with arrested persons and we must ensure independent volunteers can access detainees at any time to check on their welfare.”

“Typically, I will make a visit to St Asaph once every six weeks and then a follow up visit around a week later especially if I have raised an issue on behalf of a detainee.

“We are looking to see if a detainee is being treated fairly and in line with regulations. Do they have sufficient bedding, clothing and access to food and drink for example.  We also need to ensure they have been given access to any medication they may be in need of on a daily basis.

“Operating in pairs, we approach a custody area unannounced and we have to be given immediate access.
"Accompanied by a sergeant or a civilian detention officer, we speak to detainees and check the condition of the cells to make sure they are clean and that everything is in working order.
“When vulnerable people are held in custody, we have to ensure that their needs are met as well as those of other detainees.
“We are not allowed to know the names of people in detention or what they are in for which allows us to retain our objectivity.
“Normally, we will spend around 10 minutes with each detainee and discuss any welfare issues they may have. Of course they don’t have to agree to see us and sometimes, those that do see us, make unreasonable demands that are not realistic.

“But any issues of merit they do raise with us we will raise on their behalf with the custody sergeant and ask that action is taken. However, it’s important detainees know and understand that we are independent and not connected to the police as such.

“We produce a written report at the end of each visit which is signed by the custody sergeant and anything we believe needs rectifying is put right straightaway or can be raised at the quarterly meetings which are held between visitors, the Police and Crime Commissioner and senior police officers.
Neil, who moved to North Wales from his native Birmingham 19 years ago, also worked as a custody officer with G4S at Prestatyn Magistrates Court for six years.
He said: “That gave me an insight into the criminal justice system and how detained persons should be treated. That role certainly gave me an insight.

“It’s not our role to catch the police out, after all if no one made mistakes there wouldn’t be rubbers on the end of pencils would there? Our role is simply to ensure fairness and that arrested persons are treated in the right way.

“I’d encourage anyone who thinks it’s a role they could do to get in touch. You need to be outgoing and willing to talk to people of all social levels.

“We can all make a difference and if it helps ensure the police deal with people correctly and within regulations and current guidelines then that has to be a good thing.

“It’s certainly a role I really enjoy and I something I intend to continue doing for the foreseeable future.”

Executive Officer Meinir Jones, who has responsibility for overseeing the visiting scheme within the PCC’s office, said: “This is one of the Commissioner’s statutory duties and we are looking to recruit people over the age of 18 who either live or work in the North Wales Police area.
“They should also be independent of the criminal justice in that they do not work for the police or the probation service and do not serve as magistrates.
“The overall objective is to ensure that people held in custody are detained safely and properly and that their rights and welfare are being attended to.
“Visitors are free to arrange their own visiting times which can be anytime from early in the morning to late at night, any day of the week.”
Magistrates and serving or former police officers and special constables are not allowed to become custody visitors. To avoid possible conflict of interest, others may be excluded if they have direct involvement in the criminal justice system, such as solicitors or probation officers.
* Eligible individuals who are interested in applying to become a Custody Visitor in North Wales should contact Meinir Jones at the Commissioner’s office, either by ringing 01492 805486 or via email at: opcc@nthwales.pnn.police.uk
Posted by llanblogger at 8:10 AM