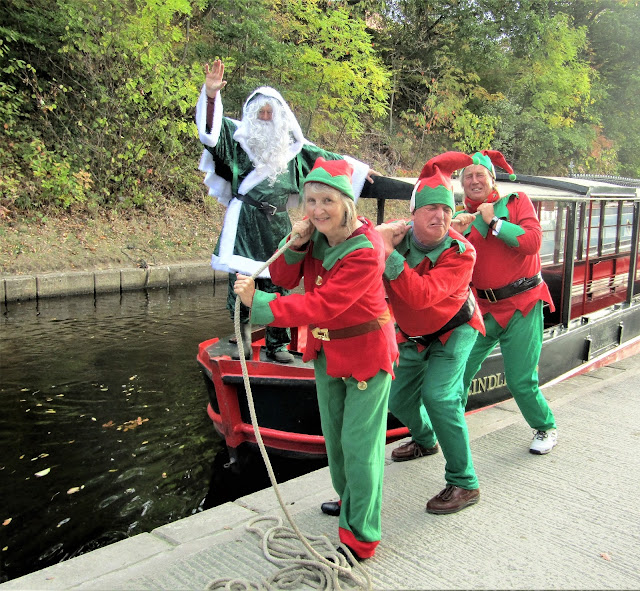 * Sion Corn is hauled into Llangollen Wharf by his team of faithful elves.


Sion Corn has been looking for the fastest way he can reach Llangollen to star in the town’s famous Christmas Festival this Saturday.
The Denbighshire tourist town is famed for celebrating various modes of transport like river, road, canal and steam train.


So the grand old man – he’s known as Santa Claus in English – has been giving them all a try to see which will get him there as quickly as possible so he can spend more time joining in the fun with the thousands of seasonal merrymakers who are expected to come flocking in to the big event on the afternoon of Saturday November 24.
Latest to be given the Sion Corn transport test was a narrow boat operated from Llangollen Wharf and used more usually to provide visitors with memorable horse-drawn trips on the stunning Llangollen Canal.


Sion Corn jumped aboard and was hauled along on a test voyage by his team of three intrepid elves.
After tying up back at the wharf, he pronounced himself well satisfied with the trim craft.


He said: “It might only travel at a few miles per hour but coming into town by canal could help me bypass all the traffic on the road on what’s sure to be a busy day.
“The only problem was that my elves got a bit puffed out taking the place of the horse which normally pulls the boat – and I’ll have to bear that in mind because you have to think of elf and safety these days!”


Thousands of seasonal revellers are expected to come flocking to Llangollen for the Christmas Festival on Saturday.
Kicking off at 1pm with the famous parade which sees Sion Corn being escorted into town over the historic bridge by a colourful cavalcade of entertainers and local groups, the event features children’s fairground rides and games, circus acts, a magician, dancing and face painting.


There will also be a chance for youngsters to visit Sion Corn in his glorious grotto and put in their early requests for what they’d like to see him bring them on Christmas morning.
During the afternoon visitors can look forward to an eclectic mix of musical entertainment from local groups on two outdoor stages and other on-street entertainment.


The fun-packed day rounds off at 5pm with the ceremonial switching on of Llangollen’s legendary Christmas lights and a firework extravaganza.
Llangollen Christmas Festival is organised by a group of dedicated community volunteers. It costs over £4,000 to stage each year and is self-funding.


The festival aims to provide a free family-orientated event in the safety of the town centre with surplus funds being donated to Wales Air Ambulance and local community groups.
Over the last couple of years the police have estimated that the spectacular event draws over 2,000 people into town during the course of the afternoon.


For the second year the festival has teamed up with Light Up Local Food, a project aimed at promoting Llangollen-based food and drink producers.
Chairman of the festival committee Austin ‘Chem’ Cheminais, who is also the local town crier and a member of the town council, said: “With the help of the community we manage, each year, to raise just about enough to fund the event and give a little to charity.


“Last year’s festival was particularly successful, in spite of the weather, and the feedback from those attending was very positive.
“The ‘market’ feel to the event provided by Light UP Local Food was particularly commented upon and helped to attract visitors from much further afield.


“Once again we’re expecting a bumper crowd to come along and help us to give a great early start to Christmas.”
Posted by llanblogger at 6:55 AM